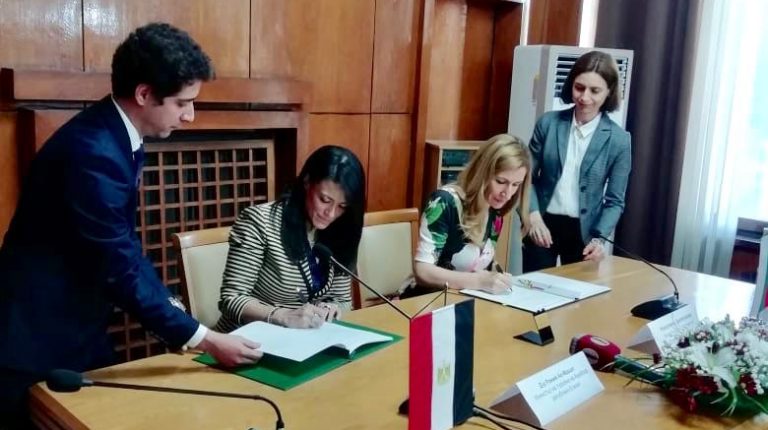 Egyptian Minister of Tourism Rania Al-Mashat and her Bulgarian counterpart Nikolina Angelkova inked a memorandum of understanding (MoU) with the aim of enhancing bilateral tourism relations, which will subsequently contribute to the economic development and growth of the tourism sector in both countries.

The signing ceremony comes on the sidelines of “Investing in Tourism Sustainability” Conference (ITSC) held in 30-31 May in Bulgaria.

Al-Mashat stated in a press statement that the MoU aims to enhance and develop the joint tourism products in the fields of cultural tourism, beach tourism, culinary tourism, and other types of tourism.

The agreement also stipulates the exchange of information between the concerned parties, organisation and participation in international events in both countries to promote tourism products, such as annual tourism exhibitions and conferences.

Moreover, the two sides discussed the possibility of organising regular trips between Egypt and Bulgaria to promote tourism to Egypt.

For her part, the Bulgarian Minister of Tourism disclosed that she is going to visit Egypt in October, heading a delegation from the Bulgarian tourism sector.

Angelkova announced that her ministry is currently studying the possibility of establishing a town twining between Egypt’s Alexandria and Bulgaria’s Burgas, assuring that this issue will be discussed later.

structural reform programme launched by the Egyptian ministry of tourism to develop and benefit from the tourism sector.

Notably, the Egyptian ministry of tourism launched in last November, a structural reform programme, with the aim of developing the tourism sector.

Following the signing, Al-Mashat referred to the new aviation incentive programme launched by the ministry and its role in pushing more tourist inflows to Egypt.

In this regard, the Bulgarian minister of tourism stressed the importance of this programme in increasing the tourist inflows, expressing her country’s desire to benefit from Egypt’s experience in this field.