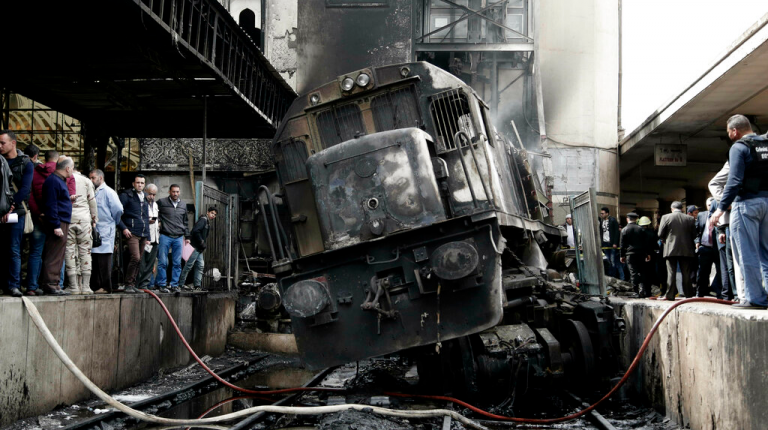 Cairo’s main railway station witnessed one of the deadliest accidents in the history of the railways’ sector in Egypt when a locomotive smashed through a buffer stop, killing 25 people and injuring around 50 others including some with severe wounds.

The accident occurred last Wednesday morning after the driver stepped off the train without putting the brakes on, Egypt’s Prosecution said were the reasons behind the latest catastrophe.

The prosecution added that the driver left the train to argue with a colleague after the latter struck him with another train. The driver left his railcar without switching the engine off, after which the unattended locomotive sped off and hit the buffer stop which led to a huge fire and explosion.

On Saturday, Cairo’s prosecution office renewed the detention of the two drivers involved in the accident along with four others for 15 days pending investigations. The train driver, who left his locomotive without turning off its engine, faces charges which include ‘intentional killing and neglect.’ 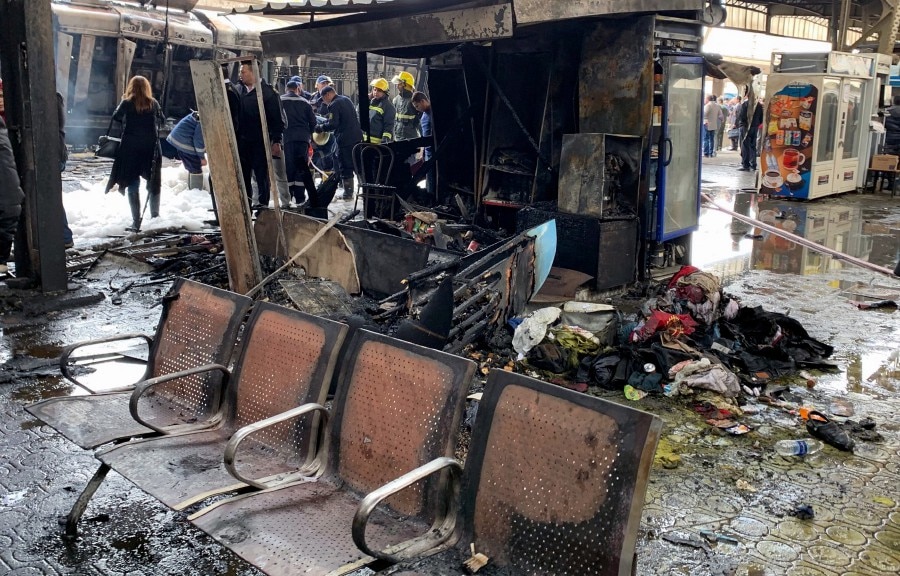 In the aftermath of the accident, Transportation Minister Hisham Arafat handed in his resignation. He said in a letter to ministry officials that he could not exonerate himself from the political responsibility.

The accused driver made an appearance after hours following the accident in a televised interview as he denied his responsibility of the accident. He claimed that he did not realise that he caused a tragedy and he went home but did not escape. The TV interview came after the prosecution ordered the detention of the driver, as he was already under investigation.

Meanwhile, the investigation revealed that the driver was suspended from work for six months before the accident due to his addiction to drugs. This shed light over how the Egyptian National Railways (ENR) chooses its workers and drivers and how qualified they are to be responsible for people’s lives.

The CCTV footage circulated online before being removed showed some victims on fire, running away from the station platform. It further showed people trying to rescue those suffering with water and blankets as well as with their own clothes.

The Ramsis station, the main and largest station in the country, is one of the most overcrowded places in Egypt. It was stunning that it lacks any safety, fire fighting system or trained rescue workers at the station for similar accidents.

Millions of Egyptians, including students and workers of low and average income, depend daily on the railway, which is the focal point between the country’s governorates. According to Arafat, more than 300 million commuters use Egypt’s railways every year.

The railway network is considered safer than other means of transportation in Egypt, especially since car and bus accidents on highways and main roads occur almost every day.

Egyptian successive governments repeatedly vowed to develop and reform the country’s crumbling railway sector. However, nothing has changed. According to official figures, the ENR budget of 2018/19 is EGP 20.6bn, decreasing from EGP 21.3bn in 2015/16.

The country’s railways have suffered for a long time from lacking safety standards. Based on an official statement by the ENR and the Central Agency for Public Mobilisation and Statistics in 2017, about 12,326 rail accidents took place from 2006 to 2017.

The Cairo station’s accident is the deadliest since August 2017, when 42 passengers, including women and children, were killed, and over 100 others were wounded after a train coming from Cairo and another coming from Port Said collided in the Khurshid area in Alexandria.

In 2012, 52 students were killed and 13 others were wounded when a train crashed into a school bus in Asyut governorate.

Egypt’s deadliest railway accident ever was in 2002, when a fire swept through an overcrowded train along a line south of Cairo, killing more than 370 people. 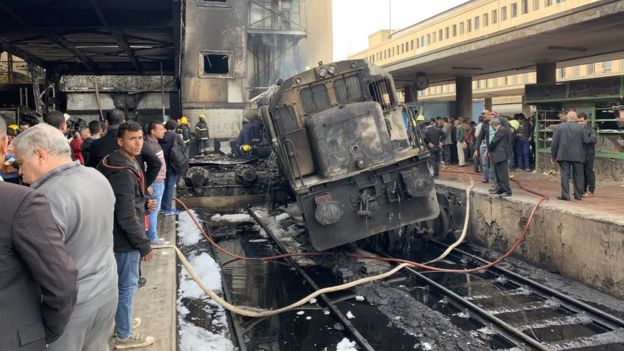 They were going to a wedding

A family consisting of five members, the mother, Nahed Ismael, 39, the father, Hisham Fathy,42, two children, Marwa and Mohamed, aged 15 and 6, as well as Fathy’s sister (could not reach her first name), were among the victims of the Cairo station’s accident.

“They have mistaken their buffer stop. They were supposed to wait at buffer stop number 4 to head to Alexandria,” Khaled Abdel Rahman, Nahed’s brother-in-law told the Daily News Egypt.

The family were heading to the coastal city to attend a wedding. The two children died. Fathy’s sister died on Friday of her injuries, while Nahed and her husband are still in intensive care at two separate hospitals.

Fathy’s sister, 21, was a student at the Nursing Institute. “We buried the two children and will bury Fathy’s sister on Friday,” Abdel Rahman said.

“We do not know what happened. Nahed and her husband are still in intensive care. We don’t know their condition or how severe their injuries are,” Abdel Rahman said, adding that they only visited them once on the day of the accident. Since then visits have not been allowed.

All must be held accountable

“There is neglect, complacency, and recklessness. There is no proficiency or seriousness and there is no follow-up of workers and drivers which is the most significant responsibility. All these are ENR wrongdoings,” Ibrahim Mabrouk, a professor of transport engineering at Al-Azhar University in Cairo told DNE.

Mabrouk asserted the need for continued maintenance of trains and locomotives. “All of ENR officials have to be held accountable for their responsibility concerning the accident. All are responsible,” Mabrouk added.

Furthermore, Mabrouk argued that the only option for developing the railway sector and eliminating repeated accidents is through partnering with the private sector.

“The private sector will develop the railway sector in Egypt, establish new lines, stations, and import new trains, which will lead to improved services,” Mabrouk noted.

Moreover, Mabrouk demonstrated that the private sector will solve all railways problems that could not be tackled over long years, noting that it will improve the service without raising its cost.

“In Japan, the government could not run the railways sector, so it partnered with private companies,” Mabrouk said, adding, “In Tokyo, there are 12 railway companies which give the government half on the ticket and improve railways.”

All ENR workers have to be trained on safety measures and crisis management, Mabrouk said. He asserted the need to depend on advanced technical systems which remotely control the speed of trains when the permissible speed is exceeded. 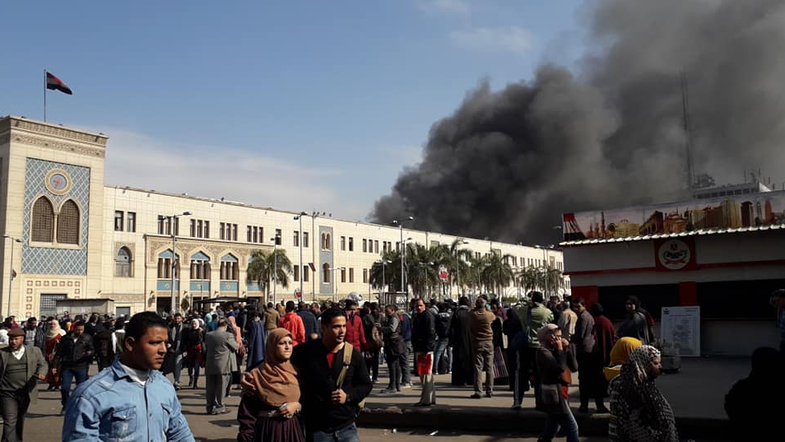 Over and above, Mabrouk cited that if the government does not want to partner with the private sector, it could form a supreme council consisting of ENR senior officials, representatives of ministries of health, justice, interior, and headed by the prime minister. This council shall be responsible for the security and safety of the railway sector, he pointed out.

The successive government kept saying that they take loans aiming to improve the service but nothing was improved or developed, Mabrouk maintained.

In July 2015, the government raised train ticket prices with EGP 20 for first class and EGP 10 for second class. Fears of new raises this year have increased as the government is gearing up to completely end fuel subsidies in July 2019.

In addition, Arafat previously announced that the ENR income does not exceed EGP 2bn, while its operating expenses are over EGP 4bn or 5bn.

Army to assist in development of Egypt’s railway: Al-Sisi