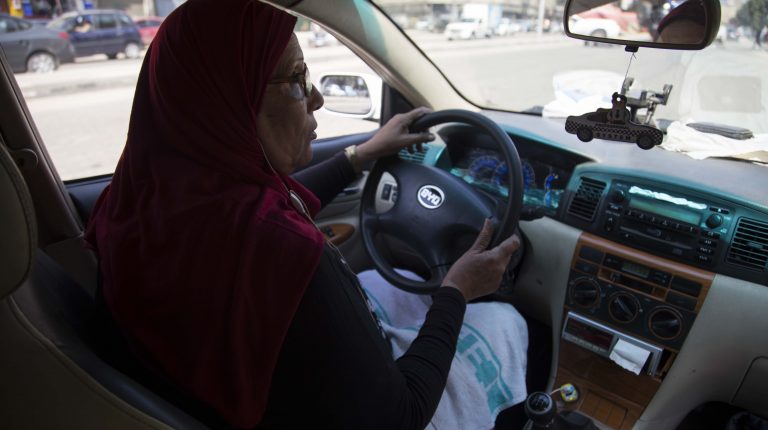 The majority of taxis you jump into have a male driver, due to the stereotypical belief that this profession is often unsuitable for women.

Despite these stereotypes, a woman called Housnia Mohamed Ali is overpowering social norms through being the first female taxi driver in Egypt.

Ali is known as Um Waleed, and she has been working as a taxi driver since 1979.

Um waleed informed Daily News Egypt how her journey with driving taxis began, saying that she liked driving since she was a child, recounting that in 1979, she received her driving license.

“I bought my car back then at a cost of EGP 7,500, through a loan from the Nasser Social Bank. Then I started working on it as a taxi. After that I paid its instalments” she said.

Um Waleed said that she is the oldest of all her siblings who were at that time in school, so she had to work to support her father. Thus, she decided to enter the profession that she liked since she was a child.

“After that I got married and gave birth. Shortly afterwards my husband died, so I had to provide for my children and their education. I have two daughters and two sons, and thank God all of them are married now,” she said.

Regarding the obstacles that she faced during her journey as a driver, Um waleed said that the first year was the hardest, noting that the people accepted of the idea of seeing a female taxi driver, but at first, they used to get surprised to find a female taxi driver.

“Maybe society is not used to the idea of a woman entering a field of work that is only limited to men. And still there are some people who see it as strange. On the other hand, others get curious and ask me: how did you enter this field of work and why?” she elaborated.

“With time, it became normal to see a female taxi driver, as everyone knew me by then, even law enforcement officials,” she declared proudly.

“For me, it’s a very normal job, and there is nothing wrong for women to try to join a field of work that we deem as male-dominated. I see nothing wrong with that if the woman has the required skills and abilities,” Um Waleed stressed.

Notably, in a recent report, the Egyptian Centre for Women’s Right (ECWR) revealed that 83% of Egyptian women and 98% of foreign women in Egypt have experienced sexual harassment in some way or another.

“It’s usual in Egypt that women are subjected to some minor acts of harassment when they drive a car. Some are encouraging and show support for me. Others act by trying to block my way to show they are more skilful drivers, and to prove that it’s a male-dominated job,” Um Waleed stated.

Concerning the obstacles in the profession itself, Um Waleed remarked that throughout the years, she did not suffer much, except for the last three years, as she, along with all the other male taxi drivers in Cairo, due to the appearance of Uber and Careem.

“As long as I am alive and healthy, I will work  to support myself, it is very difficult for me to ask my daughter or son to give me money,” she said.

“I want to go toon a pilgrimage (Haj), but it currently costs a fortune. May God give me the means,” she said hopefully.

“My advice to all women, is not to pay attention to social norms, but just to work in the profession you have a passion for, which is legal and legitimate,” she advised.

ECWR condemns assault against girl in metro by 2 Niqabi females

Technology field is not limited to men: Raye7 founder