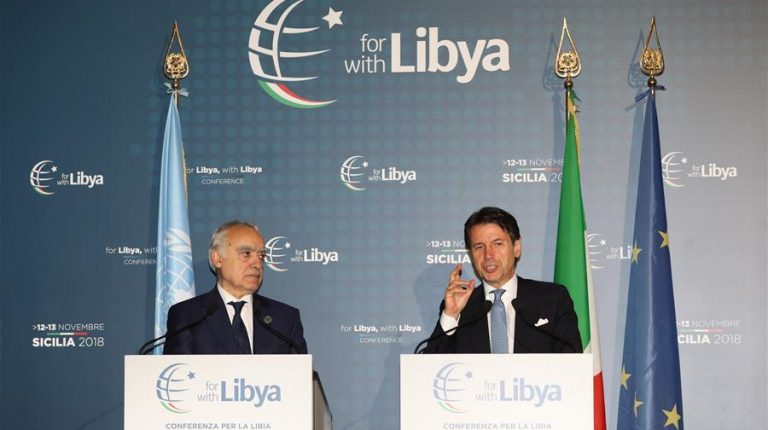 After an anticipated two-day high-profile summit held in mid-November in Palermo, Italy, disputed opinions erupted on whether it was able to advance constructive solutions to the Libyan crisis. News on who attended and who walked out also overshadowed the political gathering, highlighting divisions.

Italy and the UN praised the conference’s success in bringing Libyan and international leaders together, and maintaining a political solution which would include holding a constitutional referendum and presidential elections in 2019—a plan that the UN initially intended to complete this year but was stalled due to ongoing violence.

Prime minister of the internationally recognised Libyan government, Fayez Al-Sarraj, and army commander of the Libyan National Army, Khalifa Haftar attended, although news on the latter’s participation remained confusing until he showed up on Monday but decided to only take part in side-line meetings.

UN Secretary General Antonio Guterres, Head of the High Council of State (HCS) Khalid Al-Mishri and President of the House of Representatives (HoR) Aqeela Saleh were in Palermo too, as well as EU High Representative for Foreign Affairs Federica Mogherini, while Western leaders such as US President Donald Trump, French President Emmanuel Macron and German Chancellor Angela Merkel have given the conference a miss.

A statement released by the Italian government on the conclusions of the conference said participants reaffirmed their strong and unequivocal commitment to the sovereignty, independence, territorial integrity and national unity of Libya, refuting a military solution to the crisis.

Yet, the conference revealed internal and international divisions on the Libyan file. The situation will continue to unfold in a Libyan-led inclusive national conference to be held in the first weeks of 2019 in Libya, called for by Salame. 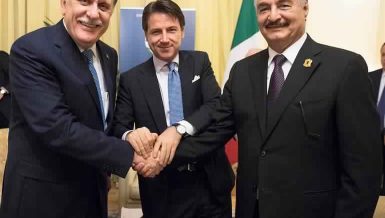 Al-Sarraj and Haftar met on Tuesday, Reuters reported, as a photo of a handshake between the two circulated. After the meeting, Salame told reporters that Haftar was committed to the political process. Media also cited sources from the meeting stating that Haftar accepted that Sarraj stays in power until the elections.

The second Deputy Head of the High Council of State Fawzi Al-Oqab said the Palermo Conference for Libya “did not bring about results but concluded with frustrating and disappointing facts,” The Libya Observer reported on Thursday. He expressed disappointment at the lack of national will to avoid chaos and suffering in addition to a sense that “Libyans don’t own their political process.”

In a video interview, Al-Mishri said he discussed certain issues with Saleh and hopes to have him in Tripoli soon.

Meanwhile, Jibril Oheida, member of parliament, said that the engagement of the HoR in discussing the two most important files, the economy and security arrangements, which Sarraj’s government has been working on since the recent security events in Tripoli, is another indication of Aqailah’s recognition of Sarraj, the Libya Observer reported.

He pointed out that the meeting between Al-Sarraj and Khalifa Haftar in Palermo confirms that the agreement between the HoR and the HCS to replace the presidential council has become ‘obsolete’ and that Sarraj will remain in power with the support of the international community, the report added.

Competition between France and Italy on handling the Libyan file has topped media coverage of the Palermo conference, suggesting Italy sought European and international recognition of its managing role, against the backdrop of French efforts which gathered Libya’s factions.

In May, a Paris meeting that included Al-Sarraj and Haftar concluded with a declaration that remained unsigned by the parties who agreed to its principles, including holding elections in December 2018.

Mogherini stressed upon EU presence in Palermo “to support the Libyans – our Libyan friends that we have been supporting over all of these years with not only political support and security work and cooperation, but also with more than €370 million in support of the Libyan people.”

In a statement on 13 November at the conclusion of the Palermo conference, the US Department of State said it welcomed the suggestions announced by the Italian government, particularly endorsing Salame’s action plan.

Expressing ‘deep appreciation’ for the Italian government for hosting the conference, the statement asserted the US’s willingness to support economic dialogue in coordination with the UN Support Mission for Libya (UNSMIL), the World Bank, and the International Monetary Fund.

“We also commend SRSG Salamé’s leadership in de-escalating violence in Tripoli and the UNSMIL’s ongoing partnership with the government of national accord to put in place more durable security arrangements for the Libyan capital,” it added.

With both US and Russian presidents’ no-show in Palermo, Russian senior representatives participated in talks on Libya, affirming their country’s position in favour of overcoming inter-Libyan disagreements along the lines of a broad national dialogue in the interests of ensuring the unity, territorial integrity, and state sovereignty of Libya, reports citing the Russian foreign ministry said. Deputy Minister of Foreign Affairs of Russia Mikhail Bogdanov met with Mishri.

“Over the last few weeks, apart from the usual Syrian track, Libya has dominated Russia’s Middle Eastern agenda,” Al-Monitor reported, recalling Haftar’s visit to Moscow earlier in November, where he held talks with Russian Défense Minister Sergei Shoigu and the head of the general staff of the Russian army, Valery Gerasimov. The report tackled different aspects of Russian sought influence in Libya.

In an analysis prior to the conference, the Atlantic Council had pointed out that US interests would have an upper hand on the Libyan situation over Russia, Qatar, and Turkey.

On the sidelines of the conference Italy’s Premier, Giuseppe Conte, hosted a high-level summit. He said it was intended to “support ending the armed conflicts and help Libya stabilise”.

As Turkey was left out of the meeting, Oktay stormed out of the international conference. “Turkey is leaving the conference with deep disappointment,” he added, stressing that what Libya needs for stability is “less foreign intervention, not more,” the Hurriyet Daily News reported.

Conte also reportedly commented his regret that Oktay left the conference. “I read his remarks and I didn’t see anything negative about Italy. We must admit that there may be special sensitivities in such decisions,” Conte said according to the Hurriyet.

Media reported that Al-Mishri explained Al-Sisi’s rejection of the Turkish delegation’s attendance of the closed meetings.

For his part, Al-Sisi stressed the need to reach a comprehensive solution in Libya which shall be spearheaded and implemented by all Libyans, and be based on implementing the political agreement on Libya, a presidential statement said.

The Egyptian president expressed support to UN-led efforts for a comprehensive political settlement, and said that Egypt sought to unify the military institution in Libya out of its conviction in the importance of providing a security infrastructure that is commensurate with the political settlement, the statement added.

This comes as the LNA spokesperson Ahmed Al-Mismari told Sky News Arabia that Qatar and Turkey were defending the interests of terrorist groups.

Italy in maelstrom of euro

A sublime dance in 3-D, a stage-frightened Pope and a spectacular action ride in Abu Dhabi