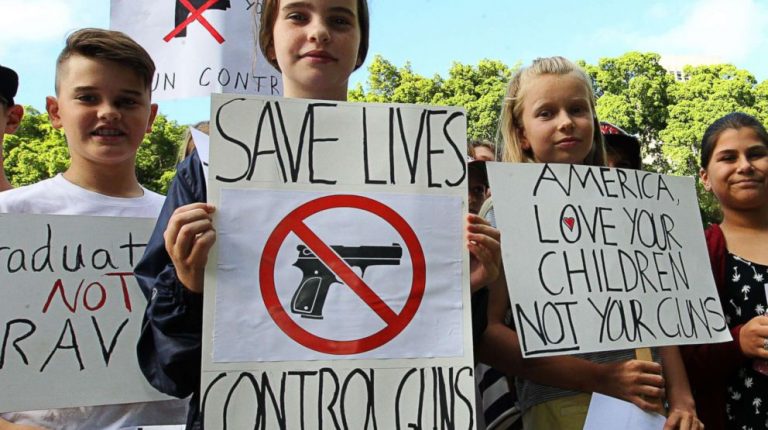 Telemachus Orfanos, 27, was all over the media as news of a mass shooting at Borderline Bar and Grill in Thousand Oaks, north-west of Los Angeles, broke out late Wednesday night. Orfanos was killed alongside 11 others. Last year, he survived a similar attack in Las Vegas which killed over 50 people.

“I don’t want prayers, I don’t want thoughts. I want gun control,” said his outraged mother in a video interview.

A gunman identified as a 28-year-old former US marine Ian David Long, opened fire at the bar. Officials said he was allegedly suffering from post-traumatic stress disorder, PTSD for short. He served in Afghanistan from November 2010 to June 2011, officials said, and was found dead at the scene, the BBC reported.

The recent tragedy comes less than two weeks after nearly a dozen people were killed in a Pittsburgh synagogue shooting on 27 October. The assailant was reported to have insulted Jews before opening fire, an attack described as one of the deadliest against the Jewish community in the US.

Robert Bowers, 46, was arrested at the scene and accused of the heinous killings in a 44-count indictment which included charges of hate crimes. According to USA Today, he pleaded ‘not guilty’ during a brief arraignment in federal court, where prosecutors emphasised, he faces the possibility of the death penalty.

Some survivors said they have been using the bar as a safe place to meet since the Vegas massacre. “Borderline was our safe space,” Brendan Kelly, who survived both attacks, told ABC News. “It was our home for the probably 30 or 45 of us who are all from the greater Ventura County area who were in Vegas.”

Stephen Craig Paddock, 64, had opened fire on a crowd on some 20,000 people attending the Route 91 Harvest Festival, from a hotel room inside the Mandalay Bay resort. He killed himself before SWAT officers could enter his room.

Meanwhile, Long was killed at the bar. “It’s a horrific incident,” Ventura County Sheriff Geoff Dean told the media after the Thousand Oaks shooting. “It’s part of the horrors that are happening in our country and everywhere.” Authorities have not determined the motive behind the attack, but accounted for the shooter’s unstable mental condition.

Washington-based non-profit corporation Gun Violence Archive counted at least 307 mass shooting incidents in the US in 2018. More than 12,500 people including some 3,000 children and teens were killed this year in gun-related crimes.

None of the perpetrators have faced terrorism charges, nor were the attacks they carried out were labelled as acts of terrorism. The US-based Environmental Systems Research Institute (ESRI) has a data-driven map counting terrorist attacks worldwide in 2018, established at 1,234 attacks, with 6,252 fatalities. Numbers and casualties resulting from gun violence in the US remain higher. The ESRI has only included the Pittsburgh synagogue attack among terrorist incidents. 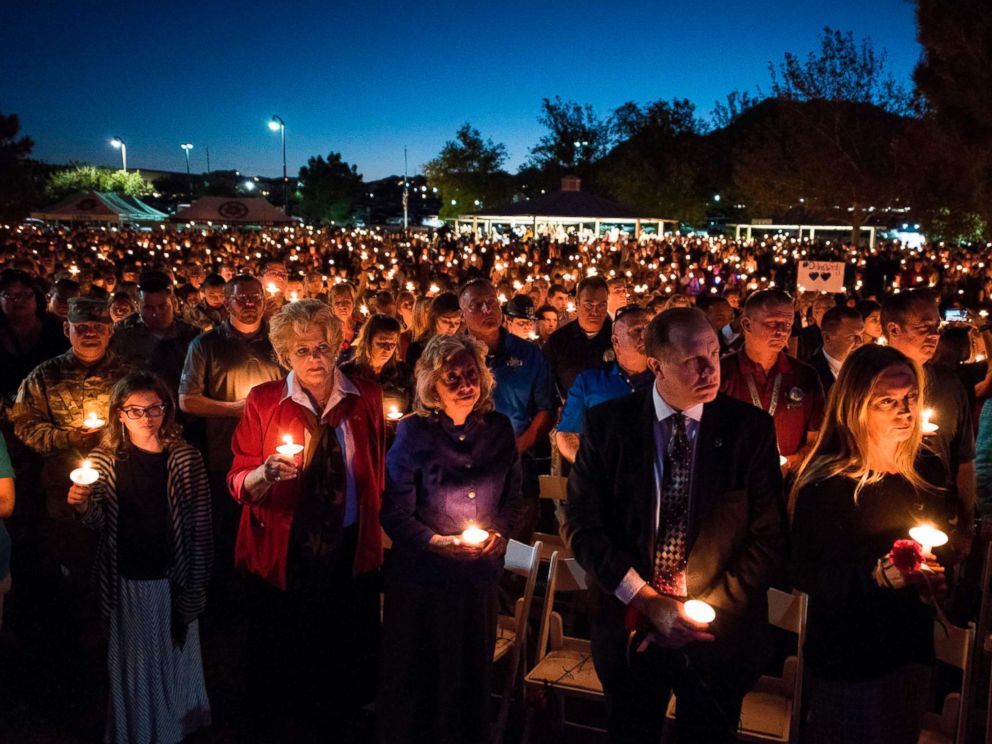 On 24 March 2018, hundreds of thousands of students rallied in Washington and across the US against gun violence. The movement was planned by student survivors of the Marjory Stoneman Douglas High School in the Parkland shooting in Florida on Valentine’s Day which left 17 dead.

“Though Washington hosted the main event, more than 800 sister marches were held across the country, from Boston to Los Angeles, and around the world. Students, teachers, parents, survivors of school shootings, and celebrities took their defiant message against gun violence and the gun lobby to the seats of power,” CNN reported at the time.

Students as young as 11-year-old Naomi Wadler gave the most powerful and heart-breaking speeches the world watched.

“As a nation, we continue to witness tragedy after tragedy, yet our politicians remain complacent. The Parkland students, along with young leaders of all backgrounds from across the country, refuse to accept this passivity and demand direct action to combat this epidemic,” the movement’s mission statement declared.

“Gun violence does not always look the same; this issue includes mass shootings, suicides, domestic abuse, violence on our streets, and more,” the movement, which continues tour campaigning, added.

A total of at least 65 shootings took place on school campuses throughout the US in 2018, according to monitor groups, although not all incidents resulted in casualties, yet dozens of students and people were killed and injured. Several incidents involved armed students.

Trump mourned the victims of the Thousand Oaks shooting in a Twitter statement on 8 November and praised police action, receiving hundreds of replies with calls for gun control measures.

In a video interview following the Pittsburgh synagogue incident, Trump blamed it on security protection inside the temple, and advocated toughening up laws to deliver death penalties to shooters of innocent people.

But, asked whether the shooting would be an opportunity to revisit gun laws, Trump said “this [violence] has little to do with [that].”

Also addressing the public after the Parkland school massacre, Trump asserted his administration was working closely with authorities to investigate the shooting and help secure the schools and “tackle the different issues of mental health.”

Yet gun control measures were not among the things Trump mentioned, as he insisted priority be given to make schools safer. 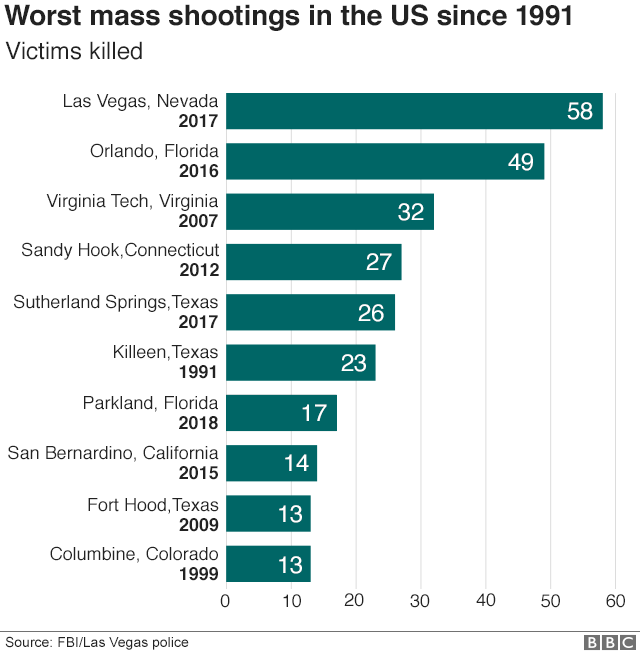 Hopes for action are being renewed in light of last week’s midterm elections which brought a Democrats majority in the House of Representatives.

According to CNBC, gun control proponents outnumbered gun rights advocates. “The new majority includes dozens of candidates who support gun control, including Lucy McBath in Georgia, whose 17-year-old son was fatally shot in 2012, and who made gun violence the centrepiece of her campaign,” the report said, citing some supporters among 17-newly elected House Democrats who back stricter gun laws.

However, The Guardian noted that the Republican-controlled Senate is likely to block “even moderate, bipartisan gun control measures from becoming law,” quoting Senate majority leader Mitch McConnell as saying on Friday “it’s highly unlikely there will be restrictions passed.”

In 2016, the Senate rejected restrictions on gun sales, despite the fact that one of the deadliest shooting in US modern history had taken place on 12 June at an Orlando gay night club killing 49 people.

California has the strictest gun laws in the US. However, in many attacks, including this week’s shooting, firearms were reported to have been acquired legally in California.

Still, Senator Dianne Feinstein upheld her pro-gun control stance. “Some will say California’s strong gun laws didn’t prevent this shooting, but without stronger federal gun regulations, there’s little California can do to keep guns coming in from other states,” Feinstein said in a statement on 8 November.

Feinstein added that while Republicans would argue that gun policies shouldn’t be debated after mass shootings, advocating the opposite argument that these are the best times to discuss them as to reduce the frequency of these murders.

Where to celebrate Valentine’s Day?