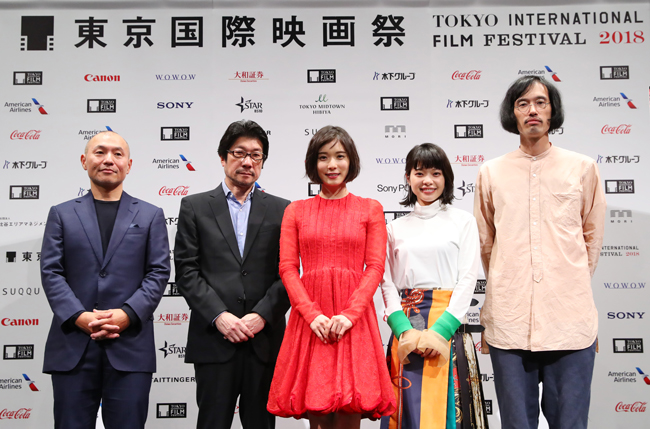 The five members of the 31st Tokyo International Film Festival’s (TIFF ) official competition jury sat down with the press on November 1, the morning after they had first appeared together at the opening ceremony.

Immediately injecting enthusiasm into the proceedings, Burk said, “My love of movies is only matched by my love of Tokyo.” Kwan confided, “I get a very secure feeling when I sit in a big theatre watching a film, so I’m looking forward to these 16 films.”

Asked about their expectations for the judging experience, Mendoza explained, “We have all received guidelines for the judging process, but at the end of the day, it’s going to be down to us. The excitement of watching a film without knowing what to expect is the magic of cinema. I think it’s important not to follow strict guidelines for what makes a good film, but to see how much the films move us and how well they use cinematic language.”

Minami, speaking in English, said, “It’s important to have first impressions while watching a film, not to get information about it beforehand. I want to watch the films with [an open] heart. It’s a big chance to meet the new worlds of these 16 films.”

Burk concurred: “I’ve intentionally tried to not read synopses. I think we’re going to be seeing some great movies. Nothing’s easy in the film business, so the fact that these films were selected is really something.”

Stanley Kwan mentioned that he had gone to see A Star Is Born, the TIFF’s opening film, on its first day of release in Hong Kong, because he already knew the story and the stars. “But being a jury member is different from just being a filmgoer. I don’t want to know anything about these 16 films before watching. If the film can move me, that’s [what matters].”

Commenting that Mendoza is the first director from the Philippines to head the jury at the TIFF, he was asked for his thoughts about the milestone. “I’m very happy, privileged and honoured, considering that I’m a filmmaker coming from a developing country,” he responded. “We’re celebrating our 100th anniversary of Philippine cinema this year and the next, so I think it’s important for artists from my country to see that a fellow filmmaker is heading the jury in a developed country like Japan.”

Minami was then asked about being the ‘Japan representative’ on the jury. “It’s a huge honour to be part of this, with this wonderful producer, directors and actress. They have made movies I’ve been really inspired by. We’re already getting along well and have established a sense of camaraderie. We all share a love of cinema and have devoted our lives to it. As Mr. Mendoza mentioned, it’s our responsibility to decide the Grand Prix. After this early press conference, we’ll be watching three films today.”

Noting that there were not many female directors in the competition section of the 31st TIFF, a (male) journalist asked whether the jurors felt festivals had a duty to include more of them.

Alidoosti responded, “I think everyone has to play a role in equal representation. This problem or issue that women are a minority among filmmakers, is because women are a minority everywhere. We have to take little steps forward to improve this. But I was heartened to hear yesterday that this is the first time the jury has included two females, so maybe we can see this as a step.”

Minami, thanking the journalist for an important question, said, “In our world, it’s natural to have 50-50 representation, but maybe next year we’ll have three female jury members, and maybe even a female jury president. Although we don’t have many female directors in the competition, I believe that the TIFF is moving forward on this issue. I think it’s important that we speak out, as Cate Blanchett said at this year’s Cannes Film Festival.”

Burk added, “I’m upset that we have to continue having questions like this, although I understand that it’s important. I look forward to having juries with all female members. I hope it will become a norm that both genders and all races will be represented, since there are many more qualified jurors than myself.”

Mendoza concurred, “I’m all for equality and representation. Ten of my 13 feature films are about female empowerment. Where I’m coming from, in the Philippines, it is considered very patriarchal. I think it’s actually very matriarchal, and we’ve had two female presidents. But a film festival is decided on the films, not on gender. The fact that festivals are aware of this problem now is a big leap.”

Finally, Mendoza was asked what would happen if the jury was split on the selection for the Tokyo Grand Prix. “There are times that we have to choose a film that we don’t necessarily like,” he responded. “Just because we don’t like it doesn’t mean that the film is not good. As the president, I would choose the film that is good, even if I didn’t personally like it.”