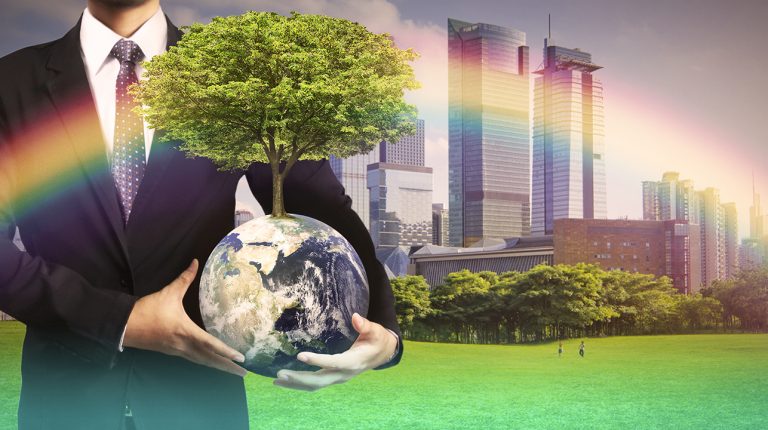 Banks operating in the Egyptian market have begun to feel their way towards financing environmentally friendly projects, or so-called green banking, to achieve a larger goal of sustainable development.

“Green banking encourages the adoption of environmentally friendly practices and contributes to reducing the negative impacts of climate change, which restores the balance of global growth and enhances the role of sustainability as a future concept that carries the potential for growth for society and the environment,” said Mohamed El-Etreby, chairperson of Banque Misr and deputy head of the Union of Arab Banks (UAB).

Among the lessons learned in the aftermath of the global financial crisis in 2008 was the recognition of the importance of harmonising the banking industry with the social and environmental realities, and hence the need to apply the concept of green banking and promote the green economy and sustainable financing, he added.

During the forum held by the UAB recently on the green economy, El-Etreby spoke about the path to sustainable development.

Mainly, he explained that sustainable financing offers promising opportunities for the growth of financial institutions and provides a broader horizon for expansion and physical growth through financing clean energy projects and optimising energy use, as well as microfinance and microenterprise financing.

He said efforts were being made by the G-20, the Group of Seven, the United Nations and the Financial Stability Council to encourage efforts to establish a sustainable financial system and promote opportunities for growth of a green economy, that respects environmental controls.

Since the conclusion of the Paris Agreement in 2015; European financial regulators have stepped up their scrutiny over the banking sector to hedge against the risks of climate change and to prepare for shifting to a low-carbon energy system, he pointed out.

“Green bonds are the financing options available to organisations willing to support climate and environmental investments,” he said.

Moreover, the green bonds are called this name because their proceeds are used to finance green projects, such as clean energy projects or government transport projects that reduce emissions, he explained.

According to the Climate Bond Initiative, a London-based non-profit organisation that relies on the green nature of bonds, green bond issues around the world hit a record high of $155.5bn in 2017, surpassing previous estimates, and may reach $250-300bn this year.

The United States, China, and France formed 56% of total green bond issues in 2017, and until September 2017; green bonds worth $1bn had been floated in the Middle East and North Africa.

Credit rating agencies like Standard & Poor’s and Moody’s have recently launched Green Assessment services, which are designed to classify green bonds, such as conventional credit ratings.

The Federation of Egyptian Banks (FEB) is working to consolidate its institutional approach to sustainability, and to support the efforts of comprehensive development in the economic, social and environmental levels, based on its keenness to support the vision of Egypt 2030, he noted.

Meanwhile, El-Etreby highlighted that the efforts of the FEB in this regard are concentrated in the effective contribution to the achievement of sustainable development, and contribute to the development of slums and the development of unplanned communities and conservation of environmental resources, pointing out that the FEB established the Commission on Sustainable Development in 2014 to implement the vision of the FEB in this field and to adhere to the best international practices in this regard.

“The FEB launched an initiative to develop slums in 2014, in which banks contributed EGP 320m to develop the unplanned areas of priority in Helwan and Giza. The criteria for the classification of areas was set in accordance with international treaties, and to ensure the rights of the population and take into account their living conditions,” El-Etreby said.

He elaborated that the FEB’s initiative for the development of slums adopted the concept of comprehensive development, which is not limited to the structure, but extends the initiative to include human development, with special attention to the problems of health and education, as the pillars of development, noting that EGP 100m was allocated to establish a medical centre and a complex of model schools to serve the people of Helwan.

Moreover, he said that FEB’s initiative also aimed at the activities of financing clean energy, supporting environmental activities, training services, entrepreneurship, and supporting microenterprises, with particular attention to women living in these areas, in cooperation with all parties with a common interest in providing the best opportunities to secure the best chances of success and maximise the positive outcome of the initiative.

He pointed out that in this context, the FEB signed a cooperation agreement with the Ministry of Environment to contribute to improving the environmental conditions, developing garbage collection system from slums in Helwan, beautification, and landscaping of Helwan streets, and raising awareness among citizens to maintain the achievements of the initiative.

Meanwhile, he noted that the FEB supported the efforts of the Ministry of Electricity, which aims to adopt renewable energy projects, rationalise energy consumption, improve efficiency and preserve environmental resources, in line with Egypt’s Vision 2030 and its strategy to maximise Egypt’s regional role in world energy markets.

The FEB also supported the national initiative of the Ministry of Electricity, in cooperation with the United Nations Development Programme (UNDP) and the Global Environment Facility, to improve the efficiency of lighting systems in all sectors, including the banking sector, in order to switch to energy efficient lighting systems and expand the use of photovoltaic cells.

“Banks must incorporate financing and sustainable development plans into their future credit granting strategies and emphasise the importance of sustainable financing in diversifying banks’ portfolios and growth in a way that serves the current generations without compromising the rights and needs of future generations and the economy as a whole,” El-Etreby concluded.

According to vice-chairperson of the National Bank of Egypt (NBE), Yehia Aboul Fotouh, NBE pays great attention to the issues of sustainable development and compliance with environmental standards. He pointed out that the financing limits for major projects in the field of renewable energy and compliance with environmental standards amounted to EGP 4.8bn in June 2018.

The NBE signed an extension of a joint cooperation agreement between the bank, the Egyptian Environmental Affairs Agency (EEAA), and the Federation of Egyptian Industries (FEI) worth EGP 120m in February 2018 for 20 years to implement environmental compliance projects and to assist small and medium enterprises in adjusting their environmental conditions, Aboul Fotouh added.

Additionally, he clarified that the bank has financed 400 projects to reconcile the environmental conditions with EGP 68m between 2005 and 2017. The NBE has also signed the pioneering services agreement with the Ministry of Environment to implement the third stage of the project on industrial pollution control, which is worth a total of €14.5m.

Aboul Fotouh affirmed that the NBE is transitioning to electronic activities through the development of the internet service for individuals and companies, where the number of e-portfolio clients at the bank has exceeded 1.5 million.

“The NBE supports efforts to reduce thermal emissions and deepen the concept of green banking. The bank has adopted a plan to transform dozens of its branches into solar energy, thereby saving 3 MW per year and cutting its CO2 emissions by 2,000 tonnes per year,” he said.

Meanwhile, Dalia Abdel Kader, head of Sustainability, Marketing and Communication Division at the Arab African International Bank (AAIB), pointed out that the bank has taken the first step towards achieving sustainable development through the Mostadam (Sustainable) programme. The bank also supported projects that serve the environment and has played a key role in training graduates able to achieve sustainable development.

She pointed out that Egypt has many elements to achieve sustainable development and to protect against any climatic or environmental changes. The AAIB is the first bank to finance solar energy. It financed Benban project in Aswan, which is considered the largest solar park.

She explained that the Egyptian banking sector has already taken serious steps to activate sustainable financing with its community and environment.

Abdel Kader added that the move by the Central Bank of Egypt (CBE) to incorporate financial inclusion into the policies and practices of banking institutions in Egypt and the issuance of legislation governing microcredit has had the greatest impact in supporting and applying the concept. She pointed out that this trend supports the existence of the CBE in international forums, such as the Alliance for Financial Inclusion and Financial Inclusion Global Initiative, which was launched by the World Bank.

She highlighted the FEB’s entry into the Sustainable Banking Network (SBN), which was approved by the FEB’s board on 13 November 2016.

In addition, Abdel Kader explained that this network is dedicated to spreading the culture, policies, and practices of sustainable financing within the banking sector of each country, which has gained importance in the scope of the work of financial institutions at the international level, in the light of mounting pressures by international institutions, governments, civil society organisations and investors, such as committing to the Paris Agreement.

“Egypt is distinguished by the banking institutions leading sustainable finance, such as the AAIB’s experience that started in 2003 that worked to link banking with environmental and social elements, crystallising into incorporating environment and society risks in the criteria of managing corporate risk funding, as well as sustainability reporting and carbon footprint measurement,” said Abdel Kader.

On the other hand, the Arab African International Bank arranged and marketed a number of the most prominent syndicated loans in the Egyptian banking market, including the arrangement of a loan for the construction of six solar PV plants in Egypt with Scatec Solar, she added.

In 2014, the Arab African International Bank launched the Mostadam Forum to train young bankers on the principles of sustainable finance, in collaboration with the United Nations Development Programme (UNDP) and the Egyptian Centre for Corporate Responsibility (ECRC) becoming the first forum of its kind in Egypt and the Middle East.

According to Abdel Kader, this forum provides a comprehensive introduction to the concept of sustainable financing and demonstrates the positive interaction between the financial industry, environmental, and societal aspects and governance.

Moody’s upgrades Egypt’s ratings to B2

Egypt repays $1.36bn worth of international bonds in December

Climate crisis… shall we go vegan?

US investors view Egypt as big market, strategic partner, gateway to Africa and the Arab region

Best time to drink your cup of coffee as prices fall