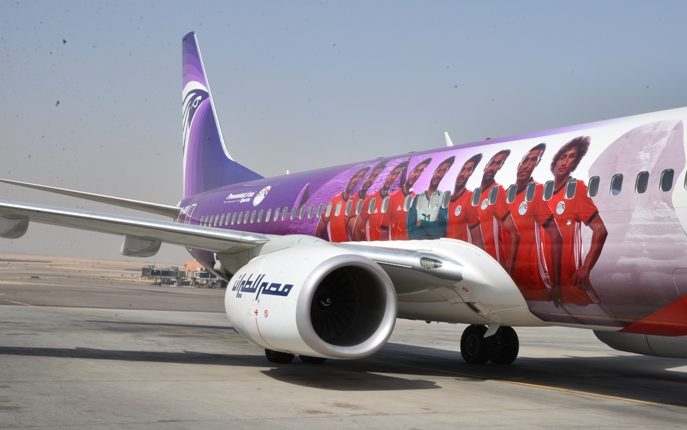 Yesterday, the Egyptian national football team departed on a private EgyptAir aeroplane, flight number MS 3080, from the new Terminal 2 at Cairo International Airport, headed to Grozny, where the national team will stay during its participation in the 2018 World Cup in Russia.

The design of the Egyptian national team’s new aeroplane has been circulated, with pictures of the team’s players boarding it, in addition to the colours of Egypt’s flag and the trademarks of the team’s sponsors.

The previous design of the aeroplane caused issues for the team’s winger, Mohamed Salah, as his picture was placed on the plane near the trademark of a telecom company that is a rival to the company he signed an advertising contract with. The incident resulted in the sponsoring company of the Egyptian team withdrawing the design and coming up with a new one for the aeroplane.

For his part, Safwat Muslim, the chairperson of EgyptAir Holding Company, said that since the team qualified for the World Cup, the company has been keen on offering all necessary facilitations and support for the team, its official mission, and fans, starting from friendly matches to the return from Russia. He said that this happened through signing several agreements and protocols to allow several charter flights to Russia in cooperation with the company Prime Tours.

This was followed by the company being named official transporter of the Egyptian team for five years. The step coincided with the return of the Cairo-Moscow line, the first flight of which took off in April, and choosing a private plane for the team’s foreign tours.