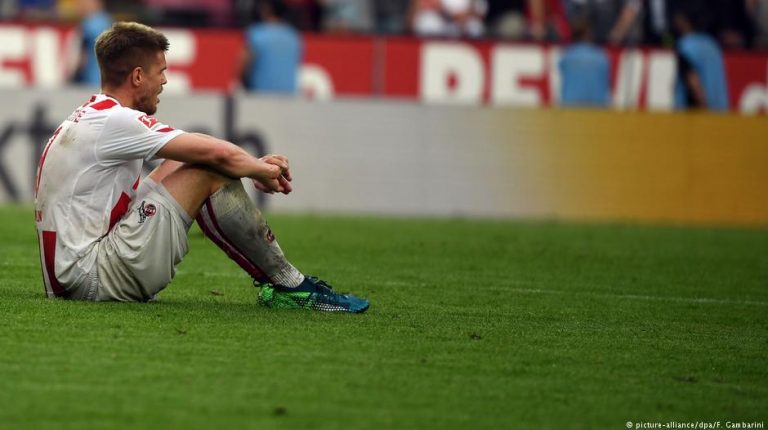 Despite a battling draw against Schalke, Cologne are on the brink of the sixth relegation in the club’s history. But DW’s Matt Ford thinks the club have taken the right steps to come straight back up.When the defeated Cologne players approached the away end in the Olympic Stadium in Berlin last Saturday, some of the jerseys they threw into the crowd came flying straight back.

When the same players repeated the gesture in front of the Südkurve on Sunday, the fans kept them.

Cologne still have a mathematical chance of survival but the 2-2 draw with high-flying Schalke, while valiant, wasn’t enough and leaves “FC” eight points from safety with three games to play.

The club’s sixth relegation from the Bundesliga, all since 1998, has been inevitable for months. The fans have come to terms with it, and so have the club.

If there’s any consolation however, it’s that that acceptance has put Cologne in a strong position to return next season. Overwhelmed by European commitments and injuries in the first half of the season, Cologne quickly found themselves rooted to the bottom of the table – and acted.

Sporting director Jörg Schmadtke was first to go in October, although the extent of the rift that had developed between him and coach Peter Stöger would only become clear later. Still bottom with only three points in December, Stöger followed.

A week later, former Eintracht Frankfurt coach Armin Veh was appointed sporting director and tasked with rebuilding the club, whether in the first division or second.

Cologne also moved quickly to contact Markus Anfang, the Cologne-born coach who has taken Holstein Kiel from the third tier to the brink of the play-off for promotion to the Bundesliga. But Anfang would prefer to join “FC” and stay in division two. “Nobody needs to explain to me what it means to work for this magnificent traditional club,” he said.

Cologne are also hopeful of tying down key players to guarantee an immediate return to the top flight, a task made easier by the city in which the club is based. The current squad contains a number of local lads plus players from further afield who have made the cathedral city their home.

One local hero Cologne hope to convince to stay is Timo Horn, whose regular goalkeeping heroics have helped his team survive this long. It’s also hoped that midfielder Marco Höger will stay, as will winger Marcel Risse, a veteran of Cologne’s last season in the second tier.

Jonas Hector was also part of that squad but the German international has been the subject of serious interest from Borussia Dortmund and is likely to leave. “No comment,” he said, when asked if he was staying. Some local media reports even suggest a contract has already been drawn up in Dortmund and is just waiting for a signature.

Defenders Dominique Heintz and Frederik Sörensen as well as attackers Leonardo Bittencourt and Yuya Osako also look set to leave, although the transfer fees Cologne will command (particularly for Bittencourt who is allegedly on the radar of Tottenham Hotspur) can be invested back into the rebuild.

Not that Cologne can take an immediate return for granted. While 1.FC Nürnberg and Fortuna Düsseldorf are two big names that may be leaving the second tier, Hamburg could still be relegated along with Cologne, as could one of Mainz, Wolfsburg or Freiburg.

At the other end, big, resurgent clubs from the former east await in the form of 1.FC Union Berlin, Dynamo Dresden and newly promoted 1.FC Magdeburg. Attractive trips for Cologne’s fanatical support, at least.

Tears crept down the cheeks of some of those supporters as they filed out of the away end in Berlin last Saturday. “My sixth relegation,” one distraught fan told this writer. He’s barely 30. “But we’ll come back.”

With the right plans already in place, there’s no reason why they shouldn’t.

56% of 2016 work injuries due to manufacturing activities