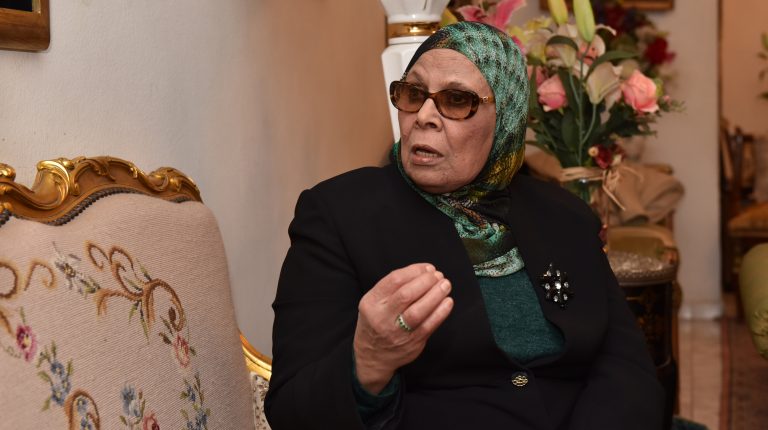 Amna Nosseir is a philosophy professor, and despite her roots from Upper Egypt, she was taught in a missionary school. Her conservative upbringing and her education at a nuns’ school created a conflict that she settled through her study of philosophy. Her speciality was fundamentalist philosophy. She also studied Ibn Taymiyyah and Mohamed Ibn Abdulwahab’s ideas.

For all these reasons, fundamentalists and extremists fear Nosseir, the professor of philosophy and religious doctrine, former dean of the faculty of human studies at Al-Azhar University, and member of the foreign affairs committee of parliament.

How do you evaluate the intellectual situation in Egypt?

Unfortunately, the fundamentalist Salafist movement has control over the minds of people, and most of them go back to the teachings of Ibn Taymiyyah, who is a great, creative man, by the way, but only belongs to his time and his environment—something that hardliners are not aware of.

Who is responsible for this?

I feel that university professors and the elite are the ones to blame, because they isolated themselves from society, then some of them wrote books but in language and intellectual levels that are difficult for regular people to understand, making them repulsed by these ideas and writings. On the other hand, thinkers of the more conservative movements were able to simplify their ideas, hence reaching the simple people, and used religion in malicious ways to spread their ideas.

How did a girl like you, from Upper Egypt, continue her education and philosophy speciality?

My father was initially reluctant and thought I lost my mind, and after many attempts, the principal of my school, who was also a friend of ours, intervened. He promised my father I would be admitted into a school that was more like a prison.

I entered the American missionary boarding school. Its fee at the time was EGP 250, which was the price of three acres of land. After finishing my secondary education, I decided to attend university, and again, my father refused. This is when I resorted to one of my relatives living in Alexandria and by chance I found out I’m a blood relative of Dr. Fathia Soliman, the dean of the Faculty of Women at Ain Shams University and the wife of Dr. Abdulaziz Al-Said, the minister of higher education at the time. I spoke with her to persuade my father to let me travel to Cairo to continue my education, and eventually, that happened.

There is a large spread of modernisation in society, how do you see this issue?

At this point, society has gone beyond the level of reactionary ideas and started embracing the ideas of ignorance. We have a strict religious culture based on conservative doctrine that spread in the region as hardliners started coming to Egypt and having their own satellite channels, especially with the drawback of Al-Azhar in the second half of the past century. This gap, besides illiteracy, especially amongst women, created the perfect environment for hardliner clerics. All we have seen over the past 60 years was not pure Egyptian, but the impact of these hardliners.

Do you think that Al-Azhar is still in a state of drawback?

Yes, and right now it has unclear trends. It is full of Muslim Brotherhood members and Salafists.

Are you waiting for these individuals to be removed from Al-Azhar?

Of course not, because I call for freedoms, and the ideas people hold are none of my business. However, there must be regulations and laws to strengthen the more moderate movements.

How do you evaluate the performance of parliament in terms of discussing citizens’ issues?

I believe whoever leads the sessions of parliament should give experts more room in order to benefit from their experience. Laws should also be discussed on a wider scale.

Why did you move from the education committee to the foreign affairs committee?

The story behind this is not really a good one. I was in the education committee due to my long years in the field of teaching, and at the beginning of the voting for committee heads, I asked my colleagues and they agreed to support me. After the voting, I was shocked to learn that I only got one vote, and that was mine, out of the 16 votes. I felt I was deceived, so I had to move to the foreign affairs committee.

How do you evaluate your parliamentary experience?

I regretted that experience very much and I will never forgive Dr. Kamal El-Ganzouri, Osama Haikal, and Dr. Moustafa Al-Fiqy because they persuaded me to run for the election, however, I am still very keen on attending the sessions and never neglected my role as a representative at parliament out of respect to those who elected me.

What do you think about the role of the 90 women in parliament?

They do not have a concrete role. Their greatest ambition seems to be their membership in parliament, and this may be the result of their young ages and limited experience in political and parliamentary work.

Do you think women are still oppressed in our society?

Yes, I do. I believe women do not receive their full rights. Idioms and traditions that undermine and humiliate women are still widespread and they are a main reason for insulting women and their dignity. I have attacked the suggestion to reduce the marriage age for girls to 16 years old in order to protect those younger girls. However, I never received any response from the concerned bodies or parliament. When I went to the National Council for Women during Ramadan, I demanded laws that protect women in order to be presented in parliament, but again, I received no response.

Can laws alone give women their rights?

Laws alone are not enough to respect women and give them their rights. What is more important is how we raise our children at home. This is the fault of parents who leave their adolescents in closed rooms with technology. In addition, the media is greatly responsible. Now we only watch aggression, cruelty, and blood in films and series on TVs, and this surely has an impact.

Schools also play a major role. Teachers have abandoned their main role to take on private tutoring because of their significantly low salaries. So we need to look into the lie of “free education” that has resulted in corrupting education. If we double the fees of government schools to give teachers decent salaries, we would see schools and their message rejuvenated. Entertainment and culture also need to return to schools, including theatre acting and other student activities of all kinds. Unfortunately, everything in the constitution regarding education and health is gone with the wind. I must stress that in parliament.

How do you see terrorism that has been striking countries every now and then?

Terrorism is now much more dangerous than it was in the 1990s. It now resembles the terrorism of the Tatars. They destroy everything and have no red lines. They also do not adhere to the religious books they claim they adhere to, and what is even more dangerous is that they use the latest technological tools to increase their destructive powers.

Why have you signed a petition form to support President Al-Sisi for a second term?

I have evaluated his achievements over the past four years and I can see them clearly and the way he deals with difficulties. This petition is a responsibility, and I must support whomever I believe does the best for Egypt, and I think Al-Sisi does this.

I must add, though, that he is working alone with nearly no one. He needs many helpers to support him and I gave him this advice at the beginning of his rule.

In the committee of foreign affairs of parliament, how do you see the American accusations regarding the rights of minorities in Egypt?

They are all untrue. We have responded to them in a detailed note that we sent to them and the media. I visited America several months ago and we spoke to them about this. Despite the enthusiastic welcome, I felt that these people are liars and exploit the issue of human rights for malicious political goals.

Prime Minister arrives to parliament to give statement