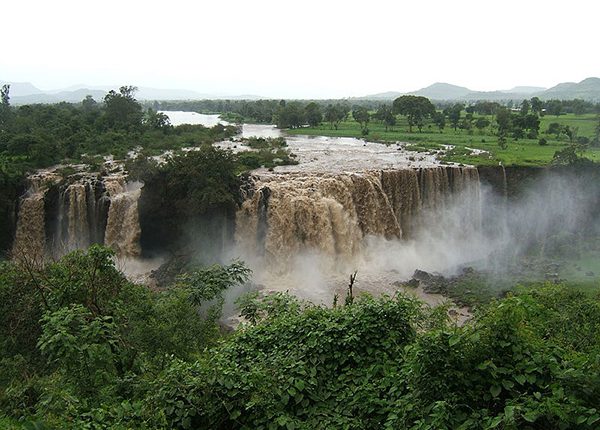 Early in January, Egyptians were alarmed by a decrease in the level of the Nile River’s water. However, the decrease in the amount of water was described as normal and that it has been the case for about 100 years from the beginning of December until the end of January every year, according to Minister of Transportation Hesham Arafat.

Although the decrease in the amount of water in the waterway was due to the end of the winter storm and not related to the construction of the Grand Ethiopian Renaissance Dam (GERD), the situation raises concerns among the Egyptian populace around future water security.

On Thursday, President Abdel Fattah Al-Sisi and Ethiopian Prime Minister Hailemariam Desalegn discussed the future of negotiations over the GERD, and Egypt’s proposal to invite the World Bank as a neutral mediator in negotiations on it. The proposal was rejected by the Ethiopian side.

For his part, the Ethiopian prime minister stressed his country’s commitment to working with the technical team regarding the dam, asserting that Ethiopia understands Egypt’s concerns over the GERD, which he stressed will not affect Egypt’s water security.

The flow of the Nile now barely supplies 97% of Egypt’s present water needs, with only 660 cubic metres per person, one of the world’s lowest annual per capita water shares. With a population expected to double in the next 50 years, Egypt is projected to have critical countrywide fresh water and food shortages by 2025, according to a study conducted by the Geological Society of America (GSA).

The research expects “problems of fresh water and energy poverty in the lower Nile Basin are likely to be seriously exacerbated in years ahead by the construction of Ethiopia’s Grand Renaissance Dam (GERD).”

Egypt receives about 70% of its water flow from the Blue Nile and Atbara Rivers, both sourced in the Ethiopian Highlands, which then merge as the main Nile in the northern Sudan.

Ethiopia is to shortly complete construction of the largest hydroelectric dam in Africa, its Grand Ethiopian Renaissance Dam. The large reservoir behind the dam is to be filled over a three to five year, or a longer, period, during which it is expected that the amount of Nile flow to Sudan and Egypt and its delta will be substantially reduced. The dam, formerly known as the Millennium Dam, is under construction in the Benishangul-Gumuz region of Ethiopia, on the Blue Nile.

In November, Egypt’s Minister of Water Resources and Irrigation Mohamed Abdelaty announced the failure of negotiations of the Tripartite National Committee on the Renaissance Dam (TNCRD)—after the 17th meeting of the committee in Cairo—to discuss the situation of the dam in light of the initial report of the two French consultancy firms—BRL and Artelia—tasked with assessing the possible impact of the dam on downstream countries.

Days after Egypt proclaimed its stance, Ethiopia asserted its insistence to continue the construction of the GERD despite the Egyptian position. “The dam is 63% completed and it is being constructed around-the-clock,” said Ethiopian Water, Irrigation, and Electricity Minister Sileshi Bekele.

Bekele added that Ethiopia is constructing the dam according to schedule, the quality and standards that a dam of this size require, and that his country has provided about 150 documents that are related to the hydrological situation of the dam and other information on the dam to Egypt and Sudan “in a transparent manner”.

Professor of soil and water resources at Cairo University Nader Nour El-Din told Daily News Egypt that Ethiopia wants to hold the entire volume of water that falls in its territories.

He added that “history refers to the failure of all Ethiopian negotiations and that Ethiopia respects only the principle of power. That was clearly apparent when it seized the opportunity of the 25 January revolution to start its manoeuvres in establishing the Renaissance Dam and finishing the issue of the Entebbe agreement.”

He said that Egypt insists on attending these meetings, in order to prevent external actors from manipulating “other people’s destinies.” He added, “Ethiopia wants to hold the whole amount of water falling in its territories [72bn sqm annually] in order to sell this water to its neighbours. Also, Ethiopia claims that Egypt wastes huge amounts of water in irrigating the desert.”

In a post on his Facebook account, Nour El-Din attributed the Ethiopian rejection of the Egyptian proposal to add the World Bank to negotiations over the GERD to Ethiopia’s desire to ensure no international witnesses or UN report proves the dam’s effects on Egypt.

He also, added that Ethiopia had accepted forming an international committee including German, British, French, and South African experts in 2011 to evaluate the impact of the dam. In 2013, the committee issued its report, pointing out that the dam was built with no initial studies, and in violation to conditions for constructing dams on international rivers.

Following this, “Ethiopia requested national experts only in order to prevent Egypt from holding any evidence that proves the negative impact of the dam…Egypt should request an Ethiopian-signed obligation that ensures that Ethiopia will keep the water flow to Egypt from the Blue Nile,” Nour El-Din wrote in the Facebook post.

Elfatih AB Eltahir, professor of hydrology and climate at Massachusetts Institute of Technology said that Egypt was not consulted when the construction of the GERD was announced.

“In order to effectively address the conflict on the Nile water between the three countries, the key is not to focus on how we fill a reservoir behind a dam here or there, but instead to address the root cause of the problem by finding ways to curb population growth, and nurture soil fertility across the Nile basin,” Eltahir told Daily News Egypt.

Eltahir proposes some necessary elements to achieve a sustainable agreement on sharing water between Ethiopia, Egypt, and Sudan. The five elements include reaching an agreement between the three countries on curtailing the rate of population growth, and a commitment from the three countries to invest in new agricultural technologies such as better seeds, greater use of fertilisers, and efficient water use technology including more efficient use of water for cropland irrigation, such as drip irrigation, which is necessary.

He also suggests in an article for Nature Middle East, rather than obstructing the efforts to build the GERD, that the two downstream countries (especially Egypt) should commit to playing the role of a reliable customer for Ethiopian electricity, sold at fair market price. In his opinion, this should ensure a sustained flux of currency from Egypt to Ethiopia, which would finance badly needed development plans and help to sustain the Ethiopian economy.

Given the natural disparity in the distribution of rainfall between Ethiopia and Egypt, Ethiopia should develop its rain-fed agriculture instead of irrigated agriculture, while ensuring a sustainable annual flux of water downstream, close to the current rate of flow into Sudan, to be divided in a separate agreement between Sudan and Egypt, Eltahir says.

He added that the countries of the Eastern Nile Basin should develop a common regional approach to incorporate the potential impacts of climate change on rainfall and river flow in any negotiated agreement.

Regarding the Egyptian proposal to invite the World Bank to the negotiations, Salama said that Egypt did not inform the bank before suggesting the proposal to the Ethiopians, and he believes that the bank itself would not accept mediation.

Egypt to offer shares in up to 10 government companies in next 18 months: finance minister

Shokry to visit Ethiopia next week to continue GERD negotiations

A message on the Nile