Overshooting of the Egyptian pound against the US dollar continues 8 months after the Central Bank of Egypt’s (CBE) decision to liberalise the foreign exchange system in November, despite some $8.4bn of portfolio inflows, according to a report published by HC Securities & Investments.

HC Securities & Investments analysts calculate that the fair value of the Egyptian pound against the US dollar should be reduced by 27% from the current value of EGP18.12 for every US dollar. The estimates are based on the mean reversion of the real effective exchange rate (REER) index.

Moreover, the overshooting could have initially been explained by the short-term supply-demand dynamics. However, the sizable portfolio inflows in recent months, with $54bn of fresh funds flowing into the system since the flotation of the currency in November should have moved the value of the Egyptian pound closer to its fair value, said the report. 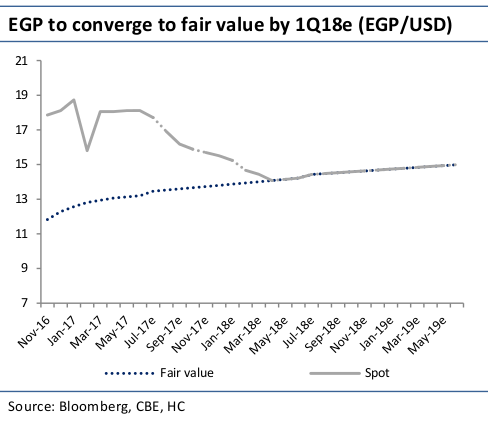 From HC Securities & Investments’ point of view, the CBE is favoring an undervalued, yet stable currency over a volatile exchange rate, as evident by an increase in non-reserve foreign currency deposits to $5.86bn by the end of May, the report indicated.

Although the negative implications that would be associated with a volatile exchange rate is understandable, the current CBE policy is not helping with containing inflation and partially limits the transmission mechanism of the bank’s monetary policy tools, said the report.

The current sky-rocket high inflation levels that registered at 30.9% in June can no longer be fully explained by cost-push factors. It is estimated that only 12% of the total 24% increase witnessed in the consumer price index (CPI) since October, which can be explained by the currency movement, according to the report. Such estimates are based on the percentage of imports to other GDP constituents, namely final consumption, gross capital formation, and exports.

On the other hand, total domestic credit growth has been largely flat since November. The Egyptian government has been expanding heavily on foreign debt, which HC Securities & Investments believes could have a similar impact on inflation.

Moreover, the report indicates that the single largest borrower in the market shows almost no elasticity to interest rate movements, thus any efforts to contain prices in the short term should be played through the exchange rate. 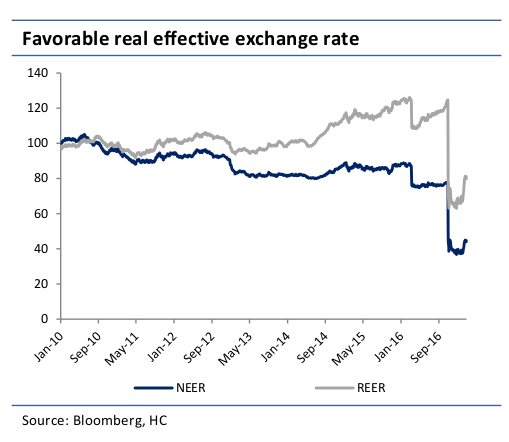 On the other hand, private business and household credit expansion have only been modest at 5% and 3%, respectively; consequently any further interest rate hikes would significantly risk growth, while on the long term, HC Securities & Investments forecasts that the government’s fiscal consolidation efforts will have a positive impact on inflation.

In regards to inflation estimates and forecasts, the report expects inflation to register an average of 24.0% in FY17/18, as a result of the budget-deficit to GDP dropping to 10.0% from 11.5% in FY16/17. Meanwhile for FY18/19, HC Securities & Investments expects inflation to reach an average of 12.0%, with the budget deficit further dropping to 8.3%. Persistently high inflation would keep private consumption growth depressed, as well as erode the Egyptian pound’s competitiveness, negatively impacting the country’s external position. The report estimates an average EGP/USD rate of 15.72 in FY17/18 and 15.38 in FY18/19.

Furthermore, the total short-term debt service stood at $12.16bn, of which $8.40bn is to be paid in the first half of FY17/18. Short-term debt includes $3.20bn loans from the African Export-Import Bank, the $2.00bn CBE repurchase agreement transaction, and the $2.59bn CBE currency swap agreement with China, all of which are fair to assume to be either public or publicly guaranteed. 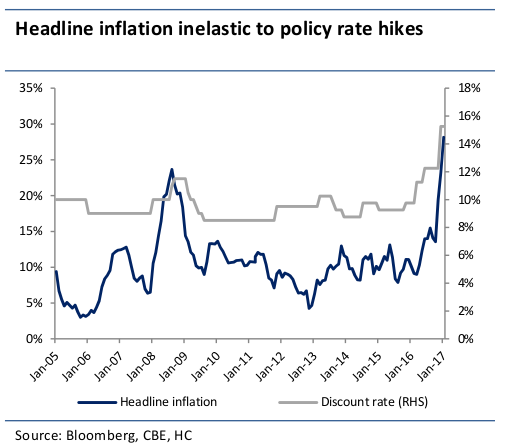 This leaves total public and publicly guaranteed debt services in 2017 at $13.16bn.

Moreover, GDP growth is estimated to reach 4.0% in FY16/17, corrected from the 3.5% that was forecasted previously, and to reach 4.4% in FY17/18, up from 4.0% previously. In FY18/19, HC Securities & Investments expects real GDP growth to accelerate to 4.9% on the back of a recovery in private consumption as inflation moderates and unemployment drops.

92% decrease in global demand on Egypt’s oil in 2018: Credit Suisse

20% of total Grade A compounds in Cairo include social infrastructure on mixed-use developments: Colliers