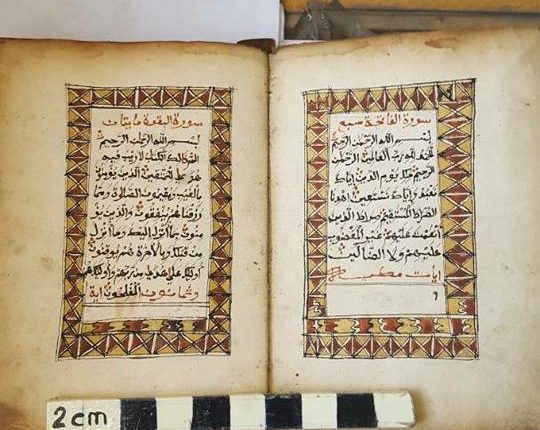 An illegal attempt to smuggle an ancient rare collection of Ottoman Qurans into Egypt was prevented by the Egyptian authorities on Sunday, according to the Ministry of Antiquities’ official Facebook page.

The Customs Authority stopped three parcels coming from Ethiopia, and after examining them, five hand written copies were found alongside six handles of old swords carved from animal bones.

Head of the Antiquities Unit in Egyptian Ports, Ahmed El Rawi, explained in the press release that the parcels were seized in the Cargo Village at Cairo International Airport, and when the archaeological committee from the Antiquities Unit at the airport inspected the batch, they confirmed their authenticity.

Some of the copies were not organised according to the normal Quran index, but rather a grouping of the Quran’s verses. Hamam asserted that “the five seized Qurans are in a very bad conservation condition, and they are in dire need of restoration.”

A water container made of animal leather was also found with the relics inside the parcels. El Rawi said that all the artifacts are in custody until the completion of investigations.

In Pictures: Protesters gather outside US Embassy in Cairo