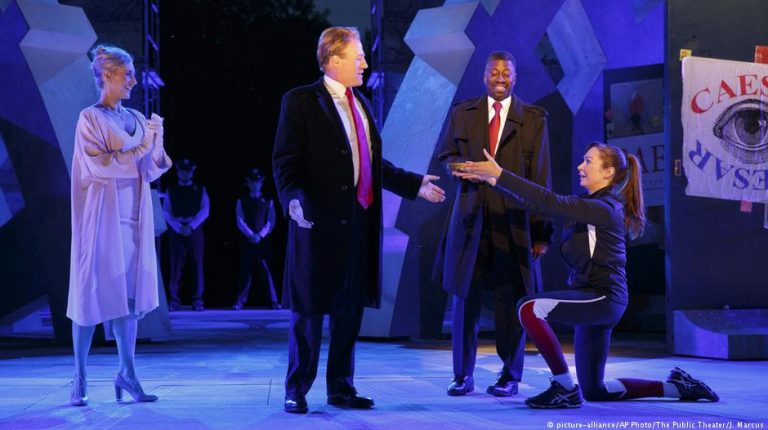 A performance of Shakespeare’s Julius Caesar in New York City has opened a new chapter in an ongoing debate in the US about the limits of art and satire in a time of political division.A free performance of William Shakespeare’s “Julius Caesar” in New York’s Central Park is the latest in a series of art performances that have been met with controversy in the US. The interpretation by the Public Theater was criticized for its alleged depiction of the assassination of President Donald Trump.

The play, which opened on May 23 and runs through June 18, was featured on a Fox News television segment Sunday, June 11, which reported that it “appears to depict President Trump being brutally stabbed to death by women and minorities.”

Directed by Oskar Eustis, “Julius Caesar” tells the story of a powerful Roman leader who is assassinated by senators after they fear he is becoming a tyrant. Although set in ancient Rome, the Public Theater’s adaptation features actors Elizabeth Marvel and Corey Stoll costumed in modern dress to give it a connection to the present-day, as is often the case with contemporary performances.

It is one of Shakespeare’s bloodiest plays; audience members at London’s Globe Theater have been known to faint from the violence. That violence is, in part, what led to the controversy and ultimately, calls to boycott the festival’s sponsors. Two of those sponsors, Bank of America and Delta airlines, have revoked their support for the theater performance.

“No matter what your political stance may be, the graphic staging of Julius Caesar at this summer’s Free Shakespeare in the Park does not reflect Delta Air Lines’ values,” read a statement by the airline. “Their artistic and creative direction crossed the line on the standards of good taste.”

An earlier statement released by Eustis warned against misunderstanding the violence: “Anyone seeing our production of ‘Julius Caesar’ will realize it in no way advocates violence towards anyone.”

A similar sentiment was making rounds on Twitter among defenders of the Public Theater, some of whom noted that critics of the play were misinterpreting its message, that turning to violence is a tyrant’s move.

In a statement on the Public Theater’s website, Eustis wrote of another intention in putting on the play for the first time in 17 years: increasing awareness.

“Julius Caesar is about how fragile democracy is. The institutions that we have grown up with, that we have inherited from the struggle of many generations of our ancestors, can be swept away in no time at all. (…) And in case you were wondering: no, we didn’t write any new lines. It’s all Shakespeare.”