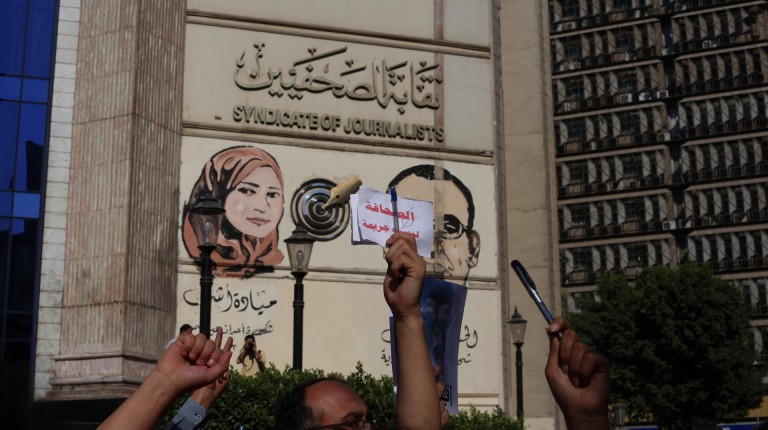 Members of the parliament Haitham El-Hariri and Ahmed Tantawy showed solidarity with the employees of blocked websites, denouncing what they described as “illegal, arbitrary, and aimed at silencing voices.”

This comes as the issue sparked internal tensions among the syndicate’s board members, as syndicate head Abdel Mohsen Salama condemned a statement issued by four members in which they blamed him for not responding to their demand for a meeting to discuss the blocking.

An official statement released on the syndicate’s website said the syndicate and its head stand by the rights of journalists working for Egyptian websites, but supported the blocking of “foreign websites which threaten national security.”

The statement further expressed commitment to receive complaints and try to solve the issue. In response, the four members said they expect their meeting with Salama to be held soon.

Four council members had released a statement on Monday, expressing full rejection of the recent block of a number of Egyptian news websites by security institutions.

The members continued to point out that the block of Egyptian websites, which have printed issues licensed by the Supreme Press Council and work in accordance with laws ratified by the state, clearly reveals that there is a campaign targeting newspapers with the aim of repression.

They requested an urgent meeting last Saturday, but they did not receive any response from the council’s leadership; regarding Press Syndicate head Abdel Mohsen Salama, they regarded this as a violation of the regulations of the syndicate as they waited for the head of the syndicate to hold the meeting and discuss the crisis.

The members had stated, after meeting with several editors-in-chief of blocked websites, that due to the measure, hundreds of journalists would lose their incomes, and in solidarity with those journalists, they announced their rejection of the block.

On 24 May, media outlets reported that 22 websites were blocked, announced through the state news agency, reportedly by unnamed security sources.

The block initially targeted Qatari news websites, such as Al-Jazeera, but also extended to the websites of Egyptian media outlets, including Daily News Egypt, Al-Borsa, and Mada Masr—the latter of which is by now accessible again at times and only through some providers.

The blocking of Qatari news websites allegedly was a response to reportedly fabricated statements made by the Emir of Qatar and published on the Qatari News Agency. It was not, however, explained how Egyptian websites ended up on the blocking list.

We have not issued any instructions to banks to stop dealing in Qatari riyal: CBE