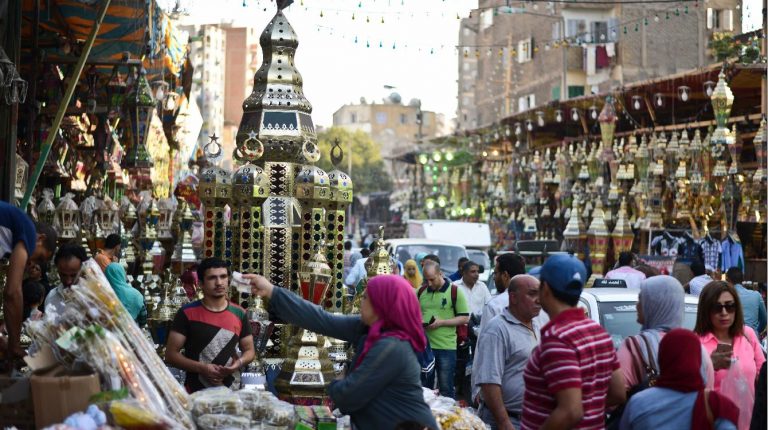 Ramadan is one holy month in the year, when Muslims fast for 30 days before celebrating Eid Al-Fitr.

For Egyptians, Ramadan represents a month of good deeds and happiness, when they celebrate and give money to the poor.

Ramadan is a month for families and friends to gather, talk, watch special television series, and eat special dishes that are only being cooked in the holy month.

However, Ramadan is coming at a difficult time, when the people of Egypt are facing hardship and are bearing the burdens of increasing prices due to the reforms the government is implementing, which have affected the prices of electricity, gas, oil, and basic commodities.

The price of approximately everything has doubled, from vegetables and fruits to rice, macaroni, sugar, and vegetable oils, as well as meat, poultry, and fish.

Moreover, in November 2016, the government decided to float the Egyptian pound, which pushed inflation to its highest level in decades, affecting the prices of almost everything.

Yet the government did not implement enough precautions to protect the people who were not able to shield themselves from the harsh consequences of these problems.

In July, the government aims to cut yet more electricity subsidies, which would affect the cost of products and put more burdens on the people.

Under the impression of the current circumstances, Daily News Egypt conducted a survey of the prices of essential commodities and looked at what the government has done to reduce the effect of high prices and rampant inflation.

When the Central Bank of Egypt (CBE) floated the Egyptian pound back in November, the prices of almost every product increased due to the great loss of the value of the pound.

As Egypt imports a lot of raw materials, even the prices of local products have witnessed strong increases. Daily News Egypt surveyed the prices of the main commodities before Ramadan.

The prices of basic commodities

The prices of rice, macaroni, vegetable oils, and sugar differ according to the quality and the type of products, as well as whether they are locally produced or imported.

Additionally, the prices of meat, fish, and poultry are getting higher and higher since the flotation of the pound, which affected the poor who cannot afford paying for those anymore.

The price of meat is between EGP 11 and EGP 160, dependant on the type of meat and the cut.

The price of poultry witnessed increases before Ramadan, reaching EGP 40 per kilogramme of chicken. The price of duck recorded EGP 55-60 depending on the geographic area and quality.

The government planned to establish 122 fair zones named “Ahlan Ramadan” around Egypt, which almost 200 companies are participating in to provide cheaper products for the people, according to the Ministry of Supply’s press statement.

Furthermore, it also provided money on the first of May as a holy month grant for subsidy card holders in order to help them buy basic food products before Ramadan.

The prices of some products, however, were rather high. The prices of Brazilian meat—which is usually cheaper than local meat—recorded EGP 55 to EGP 74 per kilogramme.

According to Reuters, Egypt’s inflation “rose to a three-decade high in April, piling pressure on the government to keep a lid on prices as it embarks on politically sensitive economic reforms likely to push them higher.”

Annual urban inflation recorded 31.5% in April, up from 30.9% a month before, according to the Central Agency for Public Mobilization and Statistics (CAPMAS).

The government, however, did not have many other choices except for raising the interest rates in order to control inflation, based on the International Monetary Fund’s (IMF) suggestions.

It is important to mention that Egypt is committed to implementing reforms according to its deal with the IMF, which resulted in brokering a $12bn loan after the IMF’s approval of the Egyptian reform programme.

On Sunday, The Monetary Policy Committee (MPC) of the CBE raised the overnight deposit rate, overnight lending rate, and the rate of the CBE main operation by 200 basis points to 16.75%, 17.75%, and 17.25%, respectively—an action that many businesspeople, experts, and investors believe would not help with controlling the rampant inflation.

On the other hand, the Ministry of Supply and Internal Trade raised the prices of many products, such as meat, chicken, and duck, disproving the minister’s statements that asserted price stability.

People are not satisfied

Fathy Mohamed, who works as a customer service agent in the private sector and is a father of two children, says that the government is the only one responsible for the high prices, adding that his wage was barely enough to afford the most necessary goods for his family.

He believes that the government should have controlled the prices in a better way, as the current prices say that they do not care about the people at all.

Additionally, Magdy Samir, who works as a salesman, said that the current prices are unacceptable. He added that the price of red meat has reached a point where the majority of Egyptians cannot afford buying it, which means that white meat is the only available choice for the people; however, their prices are also increasing day by day.

“We cannot take it any more with the increasing prices,” says Om Hend, a mother of one child, who sells vegetables in a local market in Giza.

She added that the people are tired of the increasing prices and the government does not help them at all; instead, it raises the prices of everything to suffocate the people, she complained.

She believes that president Abdel Fattah Al-Sisi has to get involved to help the people who voted for him, because the situation is getting worse and worse.

Moreover, Amir Mohamed, a 32 year old lawyer, said that the sales in different supermarkets do not really constitute a reduction of prices.

He believes that the owners of the supermarkets want to fool them and sell the products in packages instead of pieces. He explained that there are no real offers that could help the people afford buying the food for Ramadan, while the government seems to not care about it.

From another point of view, the former dean of economics and political science at Cairo University, Aliaa El-Mahdy, said that the governmental decision of raising the interest rates will not help with controlling the prices. However, it would have negative effects on the investment climate.

She believes that if the government wants to control the prices, it has to establish serious free market rules, and then the producers will compete to provide the best prices.

EGP 14 increase on ration cards per citizen in Ramadan