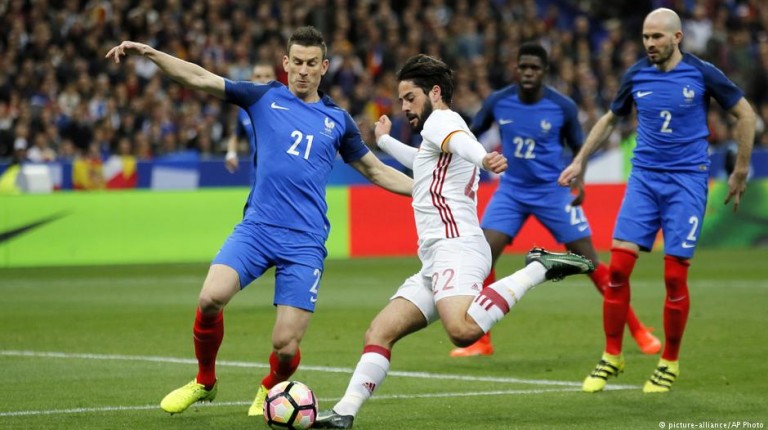 Spain beat France 2-0 as part of Tuesday’s set of international friendlies, in a game being monitored by a video ref. The tech was used to wave off an offside goal for the French, and to allow a fair one for the Spanish.David Silva scored from the penalty spot and Gerard Delofeu from open play to secure a 2-0 morale boost for Spain in their friendly in Paris on Tuesday evening.

As well as being a meeting of two of Europe’s top teams, the game was notable as another experiment using a video referee during a FIFA match.

This excitement was particularly palpable in Germany as the refereeing team happened to be German; Felix Zwayer was in charge of matters on the pitch, but Tobias Stieler was in radio contact nearby, watching the game on a batch of monitors.

The technology did alter the outcome. Twice, Stieler – the so-called Video Assistant Referee – was able to override Zwayer on crucial decisions. The video referee waved away Antoine Griezmann’s offside goal for France that Zwayer and his on-pitch assistants would have let stand, while also approving Delofeu’s goal, which Zwayer had initially disallowed for offside. Assuming no other changes, the game could have ended 1-1 without the technical input.

No respite for the Netherlands

Italy showed no mercy against the floundering Netherlands on Tuesday. Days after manager Danny Blind’s sacking and a defeat to Bulgaria that put the Dutch dreams of World Cup qualification in jeopardy, the Azurri managed to overturn an early deficit to win 2-1 at the Amsterdam Arena.

An Italian own goal had opened the scoring, but Eder equalized within minutes. Leonardo Bonucci added another later in the first half – both Italy’s goals came from set pieces against the Dutch, now under the stewardship of caretaker coach Fred Grim.

To the east, Belgium and Russia played out a 3-3 draw. Belgium had led 3-1 at half time on a Kevin Mirallas penalty and a Christian Benteke brace, but Russia scored in the 74th minute and then in stoppage time to salvage a draw.

Read: ‘Our last world class generation was in the 1980s’ – Holland need a new coach

Iceland, Sweden, Guinea, Morocco, Bosnia-Heregovina and Georgia were among the other winners on the night amid a raft of international friendlies across Europe and Africa.