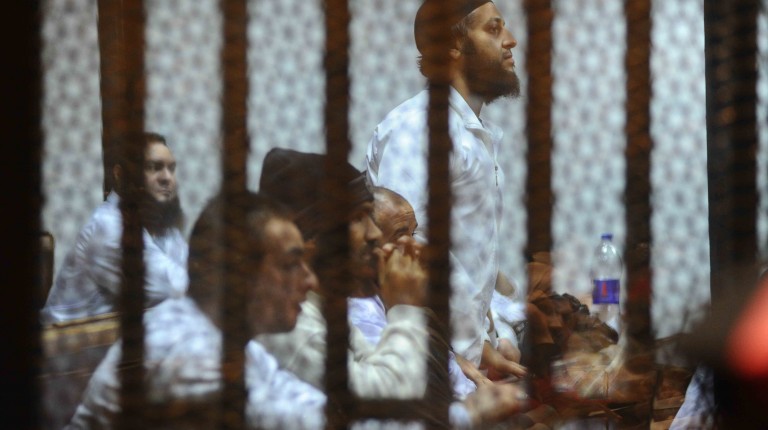 The Ministry of Interior released a statement on Friday in which it declared that it arrested 13 Muslim Brotherhood members, allegedly affiliated with the group’s military wing, while they were holding a meeting in an educational centre in Alexandria.

According to the statement, the police raid against the centre in Alexandria came after security forces received information that they were planning to hold meetings for the sake of restructuring the brotherhood’s military wing.

“In the context of exerted efforts to keep the security in Egypt stable, security apparatuses received information that indicated that brotherhood members affiliated to the front of the killed brotherhood figure Mohamed Kamal, who is the leader of the military wing, were holding a meeting in an educational centre to restructure their military wing and escalate military operations in the upcoming period,” the statement read.

Kamal, 61, a senior leader of the brotherhood was killed at his residence at the beginning of October, during a raid conducted by interior ministry forces. Kamal was accompanied by a teacher named Yasser Shehata, who was also killed in the incident.

Recently, the ministry executed numerous raids against what it called stationing points for brotherhood gatherings, where it either arrested or engaged in heavy shootings with the targeted members that caused many deaths among those targeted.

The military movements, different than the IS affiliated group of “Sinai Province” that is heavily executing operations in North Sinai, appeared recently around Cairo and other nearby governorates and carried out military attacks against police and army figures.

These groups declared a strategy different than Sinai Province and clearly said that they are only fighting to retaliate for the killings during the dispersal of the “Rabaa” sit-in in 2013 and the current regime’s strict crackdown against opponents.

From these groups, the little-known “Lewaa El Thawra” in October 2016 executed an assassination operation against a prominent army officer, major general Adel Ragaai, who was leading the army’s ninth armoured division.

Following the assassination, the group released a statement and said that the operation was a revenge for the killings during the Rabaa sit-in and a punishment for the current regime’s betrayal to the 25 January Revolution.

As a clear sign of brotherhood affiliation, Lawaa El-Thawra also stated in the statement that it has previously warned of the frequent violations against Egyptians committed by the regime that ended in the assassination of Mohamed Kamal.

Interior Minister holds on to post amid calls for his dismissal

56 UWK members arrested ahead of Zamalek match against Sundowns