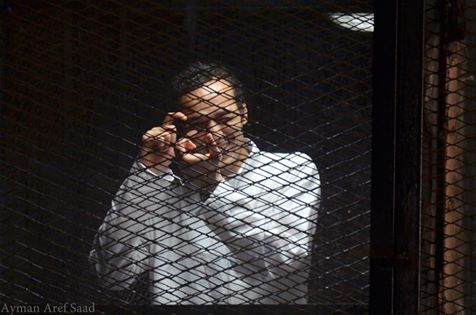 Egypt ranked as the third country in the world with the highest number of journalists behind bars in 2016, after Turkey and China, according to a recent annual census report released by the Committee to Protect Journalists (CPJ).

According to reports by local NGOs and the Egyptian Press Syndicate throughout the year, the freedom of the press has continued to deteriorate.

In 2016 and for the first time in Egypt’s press history, the president of the syndicate and two of its deputies, including the head of the syndicate’s Freedoms Committee, faced legal prosecution and were handed prison verdicts.

CPJ’s list included journalist Mahmoud Abdel Naby, correspondent for RASSD news website, detained since July 2013. He was arrested while covering clashes in Alexandria, but did not face trial until late 2016. His trial, according to the CPJ, has been postponed until 2017.

According to the Journalists Against Torture Observatory (JATO), Abdel Naby was beaten in Borg El-Arab prison and subjected to torture, including electrocution and tear gas. He was also placed in solitary confinement. His health has reportedly deteriorated.

Photojournalist Mahmoud Abou-Zeid, known as Shawkan, also stands among some of the longest-serving imprisoned journalists in Egypt. Detained since August 2013 and arrested while covering the dispersal of the pro-Muslim Brotherhood sit-in at Rabaa Al-Adaweya, Shawkan’s trial has been repeatedly prolonged. His court sessions have been postponed several times due to the large number of defendants in the case. Shawkan faces, alongside more than 700 others, charges of violence.

Shawkan was a recipient of CPJ’s International Press Freedom Awards in 2016. While being held at Tora Prison, he was diagnosed with Hepatitis C and his health has deteriorated, the journalist’s family told CPJ.

The journalists were first sentenced to life in prison in 2015 but the Cassation Court revoked their penalties, granting them a retrial.

There is also the case of Hany Salah El-Din, detained since November 2013. The journalist has “chronic conditions, including diabetes, high blood pressure, and poor eyesight. In mid-April 2015, he was sent to Al-Manial hospital in Cairo to be treated, according to news reports, but his wife says he needs additional medical care, which he is not receiving,” CPJ said.

CPJ also mentioned the cases of Abdallah Shousha from Amgad TV, arrested in September 2013, and Omar Abdel Maqsoud, from Misr al-Arabia, among others such as freelance journalist Hassan El-Kabbani, detained since January 2015.

“The journalist is being held at Scorpion prison, a maximum-security facility that is part of Cairo’s Tora prison complex, with restricted visits, according to news reports citing El-Kabbani’s wife,” CPJ stated.

In CPJ’s census of 2015, the number of imprisoned journalists in Egypt stood at 23, second only to China with 49 and surpassing Turkey by 9.

In 2015, Minister of Foreign Affairs Sameh Shoukry said Egypt has no journalists behind bars related to the freedom of expression of their work.

In November, the syndicate’s Freedoms Committee sent a letter to the presidential committee in charge of listing prisoners eligible for pardons demanding the unconditional release of 29 journalists, state-owned media Al-Ahram reported.

Egypt’s Court of Cassation to provide its services online

Muslim brotherhood detainees will not be placed on pardon lists: Tarek El-Khouly