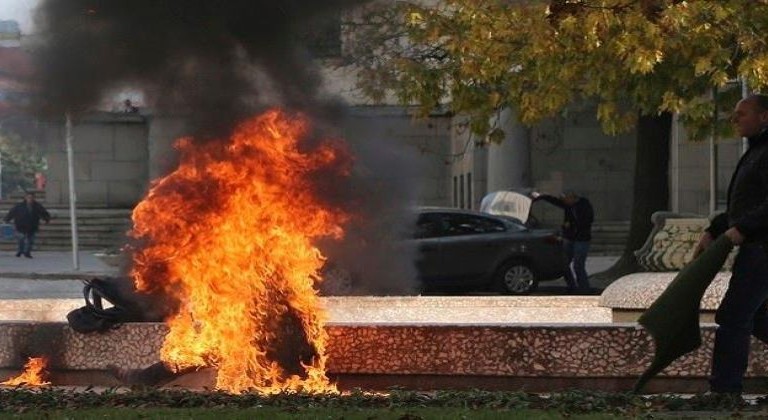 Video footage of a citizen setting himself ablaze in Alexandria on Saturday has drawn discussion about his motives, political or otherwise, amid various claims from news outlets while confirmation of this information by state institutions remains nonexistent.

The footage shows the man threatening to burn himself initially. When a passer-by tried to intervene, the man made good on his threat, resulting in both being burned. They were both transferred to the nearest hospital. The Alexandria Health Directorate reported that the man who initiated the incident is in a critical state.

The possible reasons behind why the man set himself on fire have sparked debate. Some claim that he was objecting to the rising cost of living. Other social media pages, affiliated to the Muslim Brotherhood, have exploited the incident by reiterating recent calls for an uprising on 11 November.

While the identity of the man is still unknown, many media outlets, both state-run and privately owned, have taken it upon themselves to claim that he was a former felon and was accused of robbery.

The Ministry of Interior was unavailable for comment about the man’s identity and whether he was accused of or involved in any felonies.

State-run newspaper Akhbar Al-Youm reported on Saturday evening that the man was a former felon originally from Kafr Al-Sheikh, a governorate near Alexandria. The newspaper cited a high-ranking security official, who remained anonymous, as saying that the man was named Ashraf Mohamed Shain and he recently moved to Alexandria to avoid prosecution.

Ashraf was wanted by the police after an accountant accused him of stealing items from his apartment in the building where Ashraf worked as a guard, the newspaper alleged. Akhbar Al-Youm then asserted that he “fabricated the incident” to avoid prosecution.

The incident in Alexandria comes following calls for protests on 11 November in opposition to the rising prices, corruption, and the autocrat regime.

On social media, several users linked this incident to a Tunisian street vendor, Mohamed Bouazizi, who set himself on fire in 2011. This act is considered the catalyst of the Tunisian Revolution and the Arab Spring.