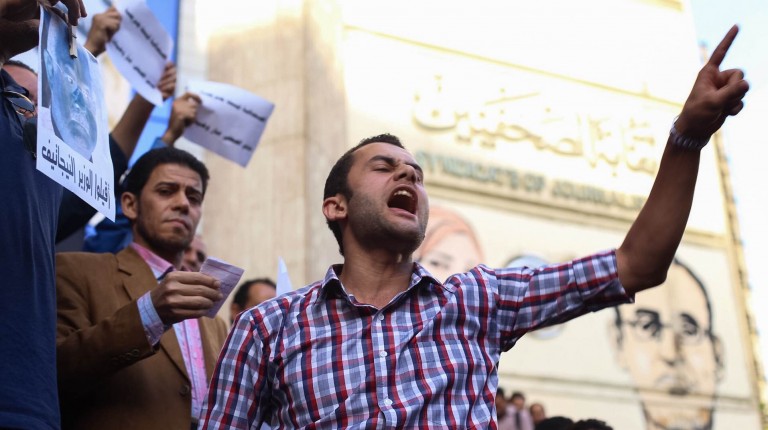 The Qasr Al-Nile Misdemeanour Court postponed on Saturday the trial of Press Syndicate head Yehia Qalash and two board members, Khaled El-Balshy and Gamal Abdelrahim, to 29 October in order to hear the defence team’s argument for the case.

Saturday’s session witnessed the prosecution team’s argument for the case and the next one in late October will hear the defence team’s argument, which is the only remaining step for the court to make a final ruling in the case.

The court listened to the prosecution’s argument, which accused the three leaders of taking advantage of the sit-in being held by journalists Amr Badr and Mahmoud Al-Saqa in order to implement personal interests.

The prosecution also accused them of helping the two journalists to evade the arrest warrant put out for them based on charges of inciting protests and attempting to overthrow the regime.

It was also argued that the Press Syndicate leaders had modified their purpose as members of the syndicate, an argument that was made in response to the syndicate’s claims that the case against them was created in order to exact revenge on them for fighting state violations through their work.

The prosecution argued that the Press Syndicate leaders had distorted the syndicate’s role, which was having an impact on the press.

Representatives from the European Union attended the court session, while the leaders themselves were absent.

Badr and Al-Saqa held a sit-in in front of the Press Syndicate headquarters in late April to show their opposition to the security raids on their private residences.

The police stormed the Press Syndicate on 1 May to arrest the two journalists.

Following this incident, journalists held protests in front of the syndicate calling for a presidential apology and dismissal of the minister of interior.

The Press Syndicate leaders were previously summoned by the prosecution following the storming to provide their testimonies in the case, but were released on the same day on a bail of EGP 10,000.

Trial of Press Syndicate leaders postponed for the 4th time