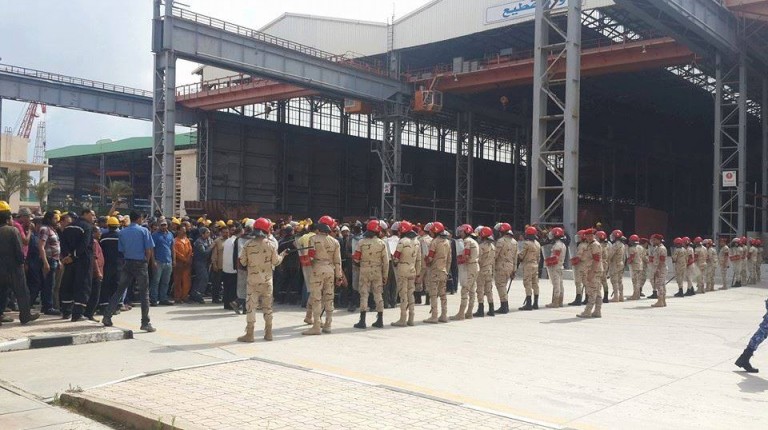 The French Union syndicale Solidaires sent letters of appeal the Egyptian President Abdel Fattah Al-Sisi and the minister of manpower labour declaring solidarity with the Alexandria Shipyard company who are facing military trials.

The organistaion demanded the release of the workers, saying that their “crime” was “acts which are in conformity with current international conventions on workers’ rights, and to which Egypt is a signatory.”

The Alexandria Military Court will issue the verdict on the workers on 18 October.

The union demanded “halting of all proceedings which have been initiated and the immediate freeing of the detained workers.”

15 workers are currently detained, while a total of 26 workers are facing trial. Dozens of workers were suspended temporary as the military locked down the factory, letting only several to operate the company.

The workers have been arrested since May, after they staged a one day strike demanding economic rights.

The Alexandria Shipyard Company falls under the supervision and administration of the Ministry of Defence and Military Production as of 2007. Martial law stipulates that if civilians breach the law inside a military zone.

The company stands as one of the 1960s’ main industrial projects in Alexandria in the maritime field, and is one of the several economic projects that are controlled by the Egyptian Armed Forces.