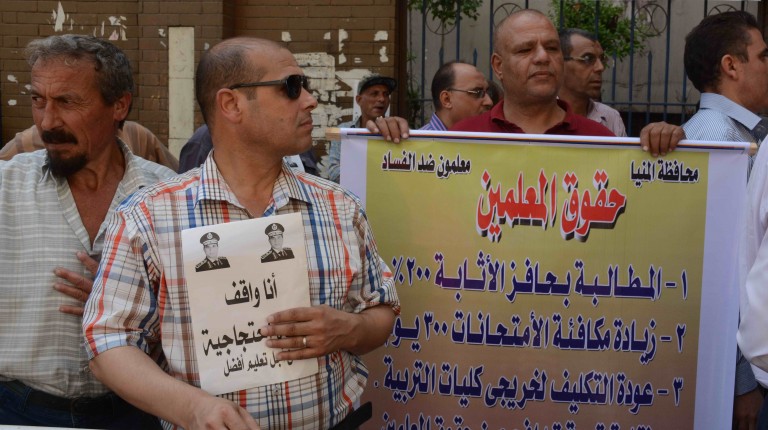 Dozens of teachers staged a demonstration in front of the Press Syndicate on Tuesday in objection of the poor conditions of Egypt’s education sector and to demand the resignation of Education Minister El-Helaly El-Sherbiny.

Ahead of the demonstration, the protesting teachers notified Abdeen court of the date and location of the event, as per the Protest law. However, the security apparatuses refused to grant them a “licence” to demonstrate, one the teachers at the rally told Daily News Egypt on condition of anonymity.

“Teachers asked the current government to sack the education minister, and to carry out immediate reforms to the educational system by applying constitutional articles that consider education a ‘national project’,” he clarified.

Teachers in Egypt suffer a poor financial situation due to low government salaries. Many teachers resort to alternatives, such as tutoring outside class time, a step which is making the already terrible level of education in Egypt even worse.

Teachers in public schools, in particular, complain of the deteriorating level of education and low salaries.

Protestors chanted their demands in front of the Press Syndicate. They called for 4% from the budget allocated to education to improve primary education and teachers’ financial situations.

“We need to empower young people going through the educational process by putting them in leadership positions,” Ahmed Emad, an English teacher, told Daily News Egypt on Wednesday.

In 2014, the Administrative Court ruled that teachers were eligible to receive bonuses on a regular basis. At the beginning of 2016, former minister of finance Hany Dimian announced that the bonus would be issued by the end of March. However, Dimian was sacked in the latest cabinet reshuffle.

Emad added: “The government should pay teachers [the regular bonus approved by Dimian] in order to discourage them from resorting to private tutoring as an alternative income.”

The government and several media outlets have portrayed teachers as “greedy” creatures who despite receiving salaries from government, continue to provide “costly” private tutoring outside schools that absorb a huge quantity of money from parents—this stereotype is unfair, Emad stressed.

Teachers in different parts of the world are respected by their governments, whether by receiving appropriate salaries that enable them to afford a decent life for their families or by also receiving moral respect in society, Emad said.

“The Egyptian government should respect and aim to improve teachers’ lives, so that it can be among developed countries,” Emad concluded.