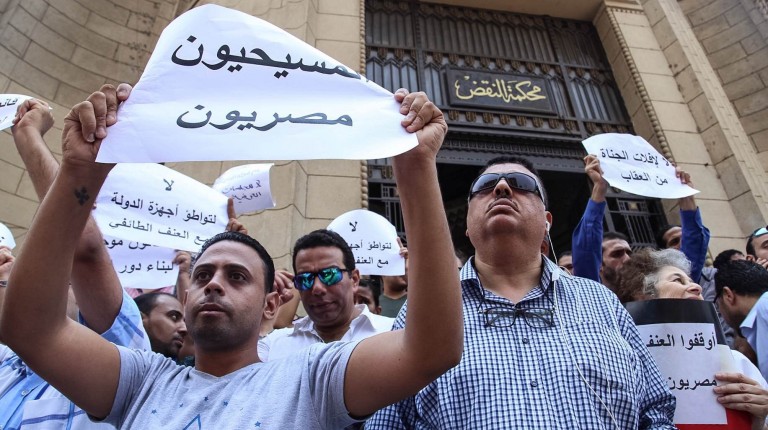 “A place of worship could become more important than any other facility,” said Marianne Sedhom, a young Coptic woman who lives in Alexandria.

Sedhom says she was raised in a church. To her, it was not just a spiritual place, but a school and a space that offered her alternatives, even for non-religious activities. She recalled how she and her generation faced religious discrimination in 1990s Egyptian society.

“In sporting clubs, they would identify our religion from our names and quickly dismiss us from sports teams,” she said, adding that she hated when they used the pretext of creating teams of players “who are from the same religion to ensure harmony”.

To Sedhom, the church sheltered her from such discrimination, and to many others the church not only matters for its holy place, for it also creates a space for community to exist when society is fractured.

“Yet, there is a narrow-mindedness that comes with the presence of a church, regardless of what the constitution states,” Sedhom claimed, wondering if new laws could foster cultural change or whether a change should precede legislative amendments in a society marked by extremism.

Dozens of churches and buildings affiliated with the Coptic community in Egypt have been destroyed by extremists. Instances of this increased following the bloody dispersal of the Islamists’ sit-in at Rabaa Al-Adaweya Square in August 2013, after which mobs burned and sabotaged churches and affiliated institutions.

At least 25 churches and monasteries, four associations, two libraries, four schools, two service buildings, and an evacuated orphanage were burned within three days, between 14 and 17 August of that year, according to the Egyptian Initiative for Personal Rights (EIPR).

EIPR said Upper Egypt governorates were the most fraught with sectarian violence, on top of which is the governorate of Minya.

Bishop Beeman, chairperson of the crisis management committee of Egyptian churches, listed at least 57 churches and buildings under renovation, because of the attacks.

A project to renovate those churches was launched in September 2013, under the  temporary rule of former interim president Adly Mansour. President Abdel Fattah Al-Sisi, then minister of defence, gave directions for the project to start with financing from the Engineering Authority of the Armed Forces.

On the third anniversary of the Rabaa Al-Adaweya dispersal, Bishop Beeman asserted that 29 buildings were renovated, and that the remaining 28 locations would be completed by the end of 2016, in statements to the US-based Christian Al-Horreyya TV.

Meanwhile, other churches have remained closed. EIPR has been publishing information on churches that were closed under the pretext of maintaining security, such as preventing sectarian tension in some villages.

EIPR launched a campaign to shed light on the hardships faced by Christian citizens while practicing their rituals, stressing upon the scarcity of churches in many areas of Upper Egypt, which forces some Christians to travel for miles to find the nearest church.

Months of sectarian assaults on Copts, notably in Minya, further complicated the situation for Christians. In recent weeks, several villages witnessed sectarian attacks on Christians, while there have been no assaults in the cities since the violent extremist wave of 2013.

In many of the reported incidents of sectarian violence, the trigger is commonly a circulated claim about a new church being built in town, or allegations that a certain person has turned his house into a church. Mina Ibrahim, a young researcher interested in the lives of Egyptian Christians, explained that there is a misconception when claiming that someone’s house was turned into a church.

“Because people cannot physically and financially travel 30km on unpaved roads several times a week to pray, sometimes they organise prayer gatherings where a priest comes to their house,” he explained, suggesting that the practice is similar to how some Muslims gather to pray.

However, there has been general hostility in those villages towards the idea of a house of worship where Christians could gather. There is video evidence of a sectarian incident in Al-Baydaa village in Alexandria in which assailants aggressively chanted: “we don’t want a church”.

Compounding these successive hardships for the Christian community, the state has been reluctant towards the issue of Christians’ rights, whether by little security interference during assaults against them or with little legislative improvements to the situation of churches that might protect the Christian minority.

Criticism mounted against the state’s practice of informal customary reconciliation in incidents of sectarian strife. The police have not interfered enough during clashes, according to testimonies by assaulted Copts, and no state authority has brought a single perpetrator to justice, despite an increasing rate of sectarian violence in the past three months.

The police instead released the defendants in the publicly condemned case involving the stripping and attacking of an elderly Coptic woman in Minya, despite the church’s expressed anger and Al-Sisi’s vow to hold assailants accountable.

Egyptians Against Discrimination, an independent rights group, rallied last week at the High Court demanding law enforcement hold the perpetrators in sectarian attacks accountable and give proper compensation to the victims.

“Those citizens feel that they give a lot to their country with nothing in return but a series of assaults,” said Naguib Gabriel, head of the Egyptian Union for Human Rights (EUHR) NGO, who was present at the anti-discrimination group’s rally.

For its part, the government claimed last month to push forward a new law on the construction of churches, as required by the constitution, to be issued within the first legislative term of the parliament.

But some were sceptical to the government’s intentions, fearing that the project would not come to light in the long run, or that it would produce a distorted law. Gabriel believes that “no law could currently face six million Salafists who would repeat over and over that they do not accept the presence of churches,” he stated.

Gabriel conducted research in the EUHR that aimed to evaluate Copts’ opinions on the establishment of a new law for the construction of churches. It concluded that 70% of the interviewees rejected the draft law proposed by the government for the restrictions it imposed on the building of churches, mainly the required approval of security bodies in the construction process.

On a further note, a lack of public transparency has surrounded the drafting of the law. Several groups’ criticised the lack of social dialogue between the church and the community.“The law doesn’t just affect the church and clergymen, but 17 million ordinary citizens concerned with sectarian attacks,” said Gabriel.

Fears of the law’s release have turned into doubts that it will ever see the light of day. Those fears were soon realised. The church, which praised the government’s project at the beginning of August, has now made a u-turn and accused the government of failing to abide by agreements with the church regarding the details of the law.

Restrictions on church construction as old as time

The construction of churches is governed by restrictions inherited from the Ottoman Empire, known as the Hamayouni decree. In 1934, then interior minister Al-Ezaby Pacha issued a decree that stipulated 10 conditions that must be met prior to licence’s issuance.

The conditions included assessing the distance between the church and nearby mosques, determining the population density of the Coptic community in a given area, whether there are several churches in a same village, and further endless bureaucratic procedures.

Coptic MP Nadia Henry has supported advocacy groups, believing that the issue of licensing churches has been accumulating, and despite all revolutions, lawmakers have persisted in maintaining Al-Ezaby Pacha’s restrictive conditions on their construction.

“Coptic citizens have the right to build churches and attend religious services. They should not be forced to do so in informal places that affect their rites, just as much as the state shouldn’t be discriminating between churches and mosques and synagogues,” she told Daily News Egypt.

Henry believes in the importance of issuing a law on the construction of churches, as part of a message the state should be sending to extremists. “Even if, due to a constitutional issue, there could not be a unified law on the construction of worship houses, there should be an article in the law on churches establishing that requirements and rights are equal to mosques,” she stated.

More than just a law

There are convictions that it will take more than just a law to improve the situation. There have been demands for a comprehensive approach to the drafting of the law, taking into consideration cultural aspects of the issue.

Henry said the parliamentary committees of human rights and legislative affairs should be involved in the discussion on the law. “If we limit it to the Religions Committee then we are again asserting the idea that we are looking at the issue from a religious point of view,” she said.

Moreover, she stressed upon the idea that the law “should not be perceived as the licence for Copts to practice their rites, and that it should clearly penalise any action obstructing people’s religious freedoms.”

Law enforcement is another concern, especially amid a general failure to abide by other laws. Gabriel argued that security bodies themselves are infiltrated with extremists and therefore will not come to apply penalties in cases where Christians were wronged.

Others argued that it was not a problem of legislation in the first place. For instance, Ibrahim believes the law is contributing to the “materialisation of religious belief and practices into buildings,” but barely serves the issue if community relations are characterised by extremism.

Supporting his claim, Ibrahim said that in the district of Shubra in Cairo, many churches and associations that were built without a licence were able to obtain permits later, as long as community residents did not oppose their presence.

Likewise, Sedhom is convinced that the Salafists will oppose any law that would allow the presence of churches. “I mean we are still nowadays talking about the need to proportion the construction of a church according to the density and needs of the community,” she said, insinuating that the measure is discriminatory when compared to the construction of mosques in Egypt.

To her, lawmakers must have a perspective based on citizenship rather than religion, which does require cultural change.

The state faces pressure to issue a law to facilitate the construction of churches. On the one hand, it is bound by a constitutional article which requires that the law be issued during the parliament’s first year, which is nearing its end. On the other hand, the Egyptian churches are squelching attempts to legalise restrictions on churches.

However, the Egyptian legislative system remains based on Islamic Sharia law, according to Article 2 of the Constitution, leaving less space for secularism to occur when addressing the law. Despite the state’s official rhetoric on national unity, the lack of proper laws and their application will continue to feed a sectarian society.

Al-Sisi :As long as we are united, no one can hurt us

State intransigence towards churches must be lifted: Maat