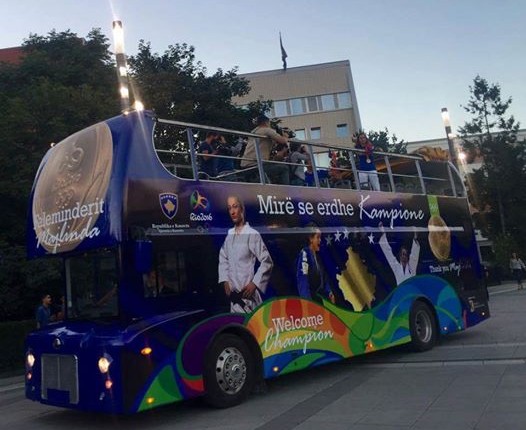 Kosovo only earned its independence from Serbia in 2008 and full recognition by the IOC in 2014. Kelmendi had previously competed for Albania in Olympic competitions, but she is now a medallist for Kosovo.

Majlinda Kelmendi won gold in the women’s 52kg judo division on Sunday and as a result won a first ever Olympic medal for the nation of Kosovo in the process.

The former world champion was the favourite for the event but was competing for Kosovo for the first time at an Olympic games.

Kelmendi had previously represented Albania at the 2012 London Games as Kosovo had not yet received recognition from the International Olympics Committee. Yet in 2014 the country—which declared independence from Serbia in 2008—was finally granted full status and Kelmendi was allowed to compete in the blue of Kosovo.

Struggling to hold back her tears moments after winning the event, the top-ranked Kelmendi scored only once against Italy’s Odette Giuffrida but did enough to win the final of the Japanese martial art. To reach the final, Kelmendi overcame Japanese three-time world champion Misato Nakamura, who picked up bronze alongside Natalia Kuziutina of Russia.

“I’m so happy,” said an emotional Kelmendi. “To be honest, I came here for the gold medal, but it’s crazy. I’m so happy for me, for my coach, for all of my country.”

She added: “People, especially kids, in Kosovo look to me as a hero. I just proved to them that even after the war, even after we survived a war, if they want something they can have it. If they want to be Olympic champions, they can be. Even if we come from a small, poor country.”

Japanese-Russian ties: Is Tokyo bound to be disappointed?