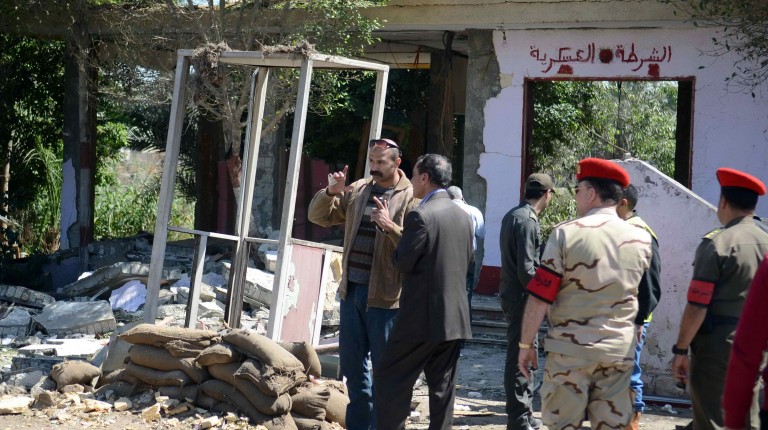 A police officer and two police conscripts were injured when an improvised explosive device (IED) detonated on Friday evening near their armoured vehicle in front of Al-Arish Third District Police Station in the North Sinai governorate, according to a statement issued by the Ministry of Interior.

“The three injured men were immediately transferred to the hospital for treatment. Intensive identity checks are being carried out to arrest the perpetrators,” the statement read.

State-run Akhbar Al-Youm indicated that a civilian was also injured by shrapnel in the same attack.

On Wednesday, the Egyptian Armed Forces announced that 85 alleged militants were killed in Sinai as part of the third phase of the operation Martyr’s Right.

The second and third armies are participating in the operation to “launch major military operations in Sinai”, the statement read.

The firepower of naval and infantry forces resulted in the destruction of 50 houses and 10 cars, as well as the arrest of three suspects.

Despite its ongoing operations in Sinai, violence against citizens is still committed by militant groups.

Clashes between state security forces and Sinai Province militants have intensified recently as security forces continue the Martyr’s Right operation. IEDs are being detonated nearby checkpoints and armoured vehicles on a near daily basis.

Militants are mainly based in Sheikh Zuweid, Rafah and Al Arish cities where residents have long complained about the infrastructure and services provided by government, as well as the absence of vital services such as health care and proper education.

According to testimonies from Al-Arish residents, related to Daily News Egypt previously, some militants affiliated with IS are members of tribes and have joined these militant groups due to the state’s marginalisation of them.

“The sons of North Sinai have been marginalised by state authorities since Sinai’s liberation from Israeli occupation. We are prevented from joining the armed forces, the police, or diplomatic and judiciary authorities,” residents from Sheikh Zuweid told Daily News Egypt on Saturday on condition of anonymity.

Security forces which impose checkpoints on Sheikh Zuweid and other nearby villages strictly treat all residents on suspicion of being terrorists or IS operatives. They carry out demeaning inspection operations that have caused outrage among residents, especially the inspections of women, a resident from Sheikh Zuweid said on Saturday on condition of anonymity.

He asserted that the state should use other means besides military power to eliminate terrorism. For example, he mentioned that the government should intensify regulations regarding moderate religious sermons and pay attention to health care and education.

On 18 May, a leading tribal figure, Abdel Hamid Saad, 45, from El-Fawkhriya tribe was reportedly assassinated in front of his home by masked militants in Al-Arish city in North Sinai governorate.

The Egyptian parliament approved last week the extension of the state of emergency in North Sinai for an additional three months, one day after a delegation of parliament members met with Minister of Defence Sedki Sobhi..

Threats to Sinai have not come to an end: Al-Sisi

2 police officers killed in their homes in North Sinai

Extending state of emergency will thwart much of terrorism operations in North Sinai: PM