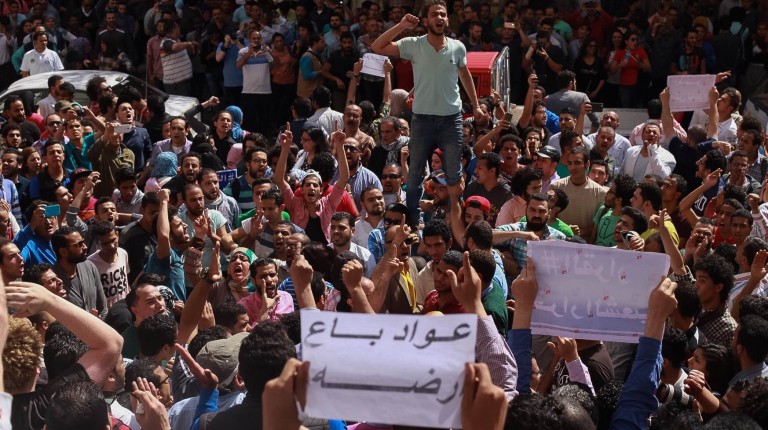 Qasr Al-Nil Misdemeanor Court on Saturday sentenced 51 defendants who were arrested in Cairo during anti-government demonstrations on 25 April to two years in prison for unlicensed protesting.

The court’s decision came after three sessions and is the first among several cases related to the protests that were prompted by a maritime demarcation agreement that facilitated the transfer of sovereignty of Sanafir and Tiran islands to Saudi Arabia.

The defendants include those arrested ahead of protests on 25 April. Photojournalist Ali Abdeen—who was arrested while covering the protests, according Al-Fagr newspaper—was among those sentenced on Saturday.

The group of 51 defendants is one among four groups that have been charged in relation to the 25 April demonstrations. The groups have been delimited according to the location and timing of arrest. There are 223 defendants in the four groups. Eighteen of the 51 defendants were previously released pending a verdict in the trial.

The Saturday ruling is a contestable first degree verdict.

The Lawyers Syndicate announced it would provide legal representation to detainees arrested during the protests.

13 NGOs denounce violations against ‘day of land and honour’ defendants

22 ‘Friday of the land’ protesters released