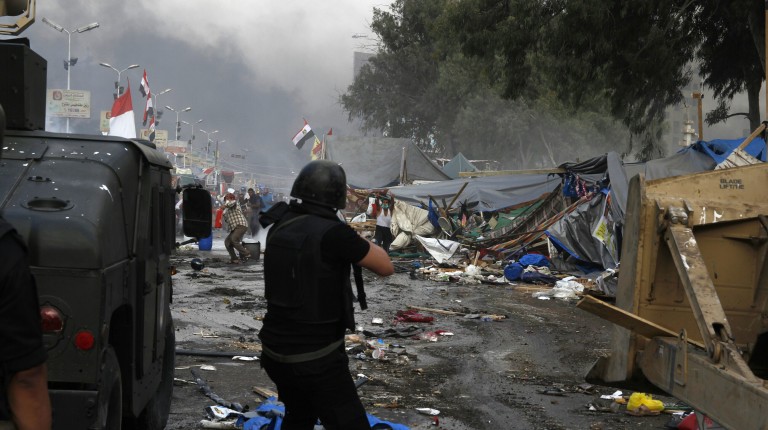 There have been 267 cases of extrajudicial killing by Egyptian security forces in 2015, according to a report by the Arab Organisation for Human Rights in the UK (AOHR). The report, released Monday, listed the human rights violation cases in 2015 including extrajudicial killings, enforced disappearances, suspicious deaths, and unlawful arrests.

“In 2015, the Egyptian authorities continued on their bloody path, with developing methods of oppression and repression, expanding it to include a wider sector of Egyptians,” the statement read.

Egyptian security forces have deployed deadly force to disperse peaceful gatherings, killing 62 persons including six children and three women, according to the report. There were also 159 detainees who died in police custody due to lack of medical care, injuries resulting from torture, and deteriorating conditions inside prison and police stations.

Dozens of detainees died in different locations in Egypt over the past two years due to crowded cells or a lack of access to medical treatment, according to official forensic authority figures.

The report claimed that 38 people were killed under suspicious circumstances as they were purportedly killed during anti-terror operations of Egyptian security forces. There was not enough information provided by the authorities regarding the circumstances in which they were killed. Authorities have also rejected to carry out unbiased investigations, according to the report.

Giza Central Prison, 15 of May Central Prison and Torah Maximum Security two Prison were all inaugurated in 2015, with the government approving the building of three other prisons in Giza, Assuit, and Damietta.

The statement has condemned the judiciary sector in Egypt as well, stating that 395 persons were sentenced to death while 1,978 were given life-in-prison sentences. “These trials were generally characterised by squandering the right of the accused to face fair trials,” the statement read.

The organisation has reportedly sent several complaints to Egyptian authorities regarding more than 393 violation cases but the authorities’ response was limited.

The government-affiliated National Council for Human Rights (NCHR) has recently requested that the Ministry of Interior accelerate their review of any complaints submitted to the ministry in addition to the request to increase the number of prison visits.

“Despite stopping the violations in some of the cases, no investigations were carried out in any of these cases and no action was taken to punish the violators,” according to the statement.

The statement said that continuing to monitor human rights violations in Egypt is difficult amid the lack of information and the fears of families of the victims.

“The regime’s keenness to show a false and distorted image of what is happening, supported with a widespread media machine, makes any human rights or media activity different from the regime’s story a crime, according to Egypt’s new terrorism law,” the statement read.

NCHR member Hafez Abu Saada denied similar accusations made by AOHR mid-2015. He described the UK-based organisation as “not credible”, claiming that it is being funded by the Muslim Brotherhood and Qatar-based media outlet Al-Jazeera.

The report came amid growing concerns over the state of human rights in Egypt during the past period. Egyptian authorities have been facing harsh criticism from several activists and human rights organisations for the worsening conditions of detention facilities, cases of torture, and the rise in the number of enforced disappearance cases.

President Abdel-Fattah Al-Sisi highlighted in December the importance of abiding by standards of human rights during his meeting NCHR President Mohamed Fayek, pledging to support the council’s activities through field visits to Egypt’s prisons and to address any violations of human rights.