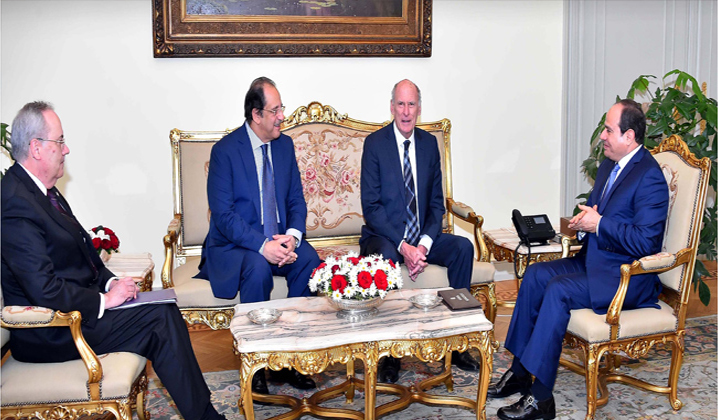 President Abdel Fattah Al-Sisi met with the Director of US National Intelligence, Dan Coats, on Tuesday in Cairo in the presence of the Chief of Egyptian General Intelligence Service, the presidency said.

During the meeting, Al-Sisi emphasised the significance of their bilateral relations, asserting Egypt’s keenness on enhancing security and intelligence cooperation especially in the field of combating terrorism.

Both also discussed the latest developments in the Middle East and political issues of common interest.

For his part, Coats asserted that the US is always keen on continuing coordination with Egypt to counter common challenges, expressing his appreciation for Egypt’s role in maintaining stability and security in the region.

During the meeting, Al-Sisi welcomed France’s participation in the exhibition, highlighting its significance, and said that it is important, and a good opportunity to explore the latest military techniques, the spokesperson said in his statement.

As for bilateral relations, the president stressed the depth of the strategic relations between Egypt and France and praised the existing cooperation between both countries in various fields, especially in the military field, the statement added.

He also expressed Egypt’s aspiration to develop bilateral cooperation in a way that serves the common interests of both countries and contributes to the development process.

The meeting was attended Egyptian Minister of Defence Mohamed Zaki, Minister of Military Production Mohamed Al-Assar, in addition to the French Ambassador to Cairo Stéphane Romatet, according to the statement.

The statement concluded that the meeting discussed ways of enhancing military cooperation between the two countries, as well as discussing the latest developments in regional and international issues of common concern, especially ways to combat terrorism.

The officials’ discussions included further ways to enhance cooperation with different African countries, in view of Egypt’s assumption of the presidency of the African Union next year, and the current distinguished relations of France with many countries of the continent.

Egypt to amend 33 articles of those restricting NGOs’ work