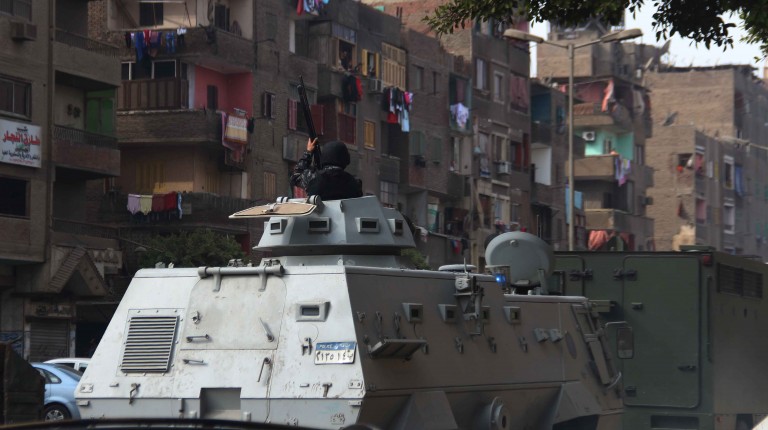 Official figures say that at least 23 people were reported dead following clashes, with over 150 arrested during the violence overshadwoing the fourth anniversary of the 25 January Revolution.

At least 12 of the protesters killed were in Matariya, a working class neighbourhood in north-eastern Cairo, which has become a flashpoint of anti-government protests since the beginning of the 25 January Revolution. This was particularly the case after the “Friday of Anger” on 28 January 2011 that left hundreds dead across Egypt.

However, protesters from Matariya now describe the neighbourhood as a republic on its own. They claim that the number of deaths on the fourth anniversary were underreported, adding that at least 20 were killed in Matariya alone.

One of the victims of the clashes between protestors, who marked the anniversary by taking to the streets and standing up to security forces, was Mohamed Said. His brother Eid described his experience.

“I’m honoured to be the brother of a martyr, and we are all ready to be martyrs for God and for Egypt,” he said.

“On 24 January, Mohamed and his friends agreed to participate in a protest the following day in Matariya square,” he said. “The start point for the protest was Al-Rahman mosque; security forces surrounded the mosque and started shooting randomly. I don’t understand whether the shootings were to disperse an expected protest, or to kill protesters.”

Eid added: “I was a soldier in the CSF’s special force, and I was trained for three years to deal with protests, and I was trained to escalate countering the protest gradually, with the last stage of escalation to be shooting birdshots five metres away from the protesters. We were never trained to use automatic guns against protestors…This is not dispersing; this is purging.”

“Mohamed was talking in his phone to a friend asking him about what to do as the security forces were shooting live ammunition; he was still holding the phone to his ear while walking outside the mosque when a bullet went through his fingers and his phone and rested in his head… Mohamed fell dead immediately,” Eid concluded.

Ismail was another protester who participated in the demonstrations in Matariya. He accompanied his younger brother and two cousins that day, and said he experienced first-hand the grief of his cousin’s death.

“I went to a protest in Matariya with my brother and my two cousins Ahmed and Mohamed Adel on the fourth anniversary of the revolution. It was a large protest march from Ezbet Al-Nakhl,” Ismail said. “Security forces vehicles countered the protest and tear gas was used, and so a lot of people ran away, but the youth held their places and threw rocks at the security forces.”

“One of the protestors was old and didn’t feel well after tear gas was used, so I took him away from the protest area and to his home, and I went home myself. Immediately after I arrived, my cousin Mohamed called to check on me and I told him to stay close to his brother and mine and to take care of each other. After almost five minutes, my brother called and told me Mohamed was shot, and they didn’t know what to do,” Ismail said. “I told them to take him in a tuk-tuk to the nearest private hospital, because public hospitals hand in injured protestors to security forces, and I would be on the way.”

Ismail added: “They took him to a hospital called Al-Shefaa, but they wouldn’t receive him as they said they don’t take cases shot by live ammunition. They took him back in the tuk-tuk and they met an ambulance car, to which they took Mohamed because his situation was critical.”

“The ambulance took Mohamed to Matariya Public Hospital. When they got out of the ambulance, police officers deployed at the hospital arrested my brother and my cousin and beat them brutally accusing them of bringing the body of someone they killed. My cousin said he is my brother,” he said.

Matariya Public Hospital received the largest number of bodies of the victims of the clashes on Sunday, and the scenes there were striking.

A relative of one of the youngest victims said that inside the hospital’s morgue and next to the bereaved family of Mohamed, women wearing crosses on their necks and men were crying, and one of the women was shouting in agony: “Oh Mina!”

One of the men spoke out: “The 11-year-old Mina Maher was in the street near the protests in Matariya with his friend Mohamed, Mohamed was shot down. Mina hurried to check on his friend, and a sniper shot Mina in the neck. Mina fell dead.”

Both government officials and protestors mourned the death of Mina Maher, and blamed the other side for his death.

Investigations have yet to reveal a killer, or any of the killers on that day.