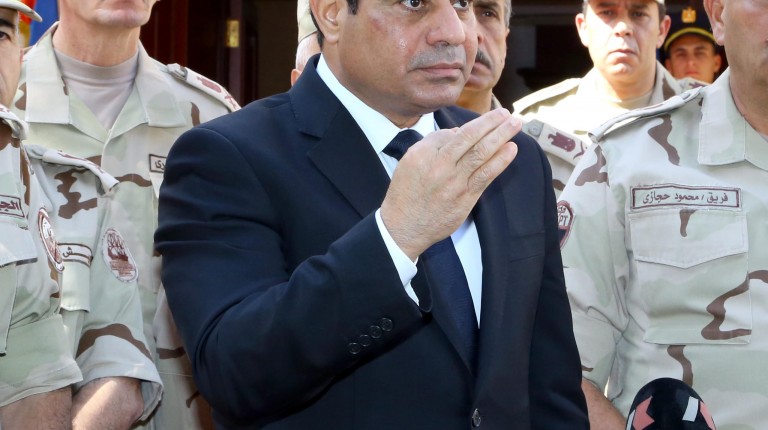 President Abdel Fattah Al-Sisi issued a decree Monday that will refer those accused of crimes against the state’s “vital” facilities to military prosecution.

The law “[pertains] to the protection of vital and public facilities” according to a Monday presidential statement, which added that the armed forces and police will coordinate to protect these facilities.

Among the facilities “protected.. against terrorist attacks” by the new law are “stations, power networks and towers, gas and oil fields, rail lines, road networks, bridges”, according to presidential spokesman Alaa Youssef.

The law will remain in place for two years, Youssef said in the statement. He added that the law was issued by Al-Sisi following consultations with the National Defence Council, approval from the cabinet and based on what was “envisaged” by the State Council. The decree will take effect starting Tuesday 28 October 2014, according to the text of the decree released by the presidency.

Hafez Abu Saada, head of the Egyptian Organization for Human Rights said that the new decree “referring terrorism crimes to military court will be against the constitution”.

Article 204 of the constitution pertaining to military trials of civilians, states: “Civilians cannot stand trial before military courts except for crimes that represent a direct assault against military facilities, military barracks, or whatever falls under their authority… or crimes that represent assault against its officers or personnel because of the performance of their duties.”
Abu Saada stated that there is greater likelihood of receiving a fair trial in a civilian court due to the levels of oversight from the Court of Cassation and other judicial bodies.

He added that he expects the decree to be challenged by rights groups and lawyers.

Groups opposing military trials have criticised and campaigned against this article in the constitution, which was voted into force in January 2014 in a landslide vote.

The issuance of the decree comes just days after 30 soldiers were killed in two attacks in North Sinai. Al-Sisi held emergency meetings with the National Defence Council following the attacks.