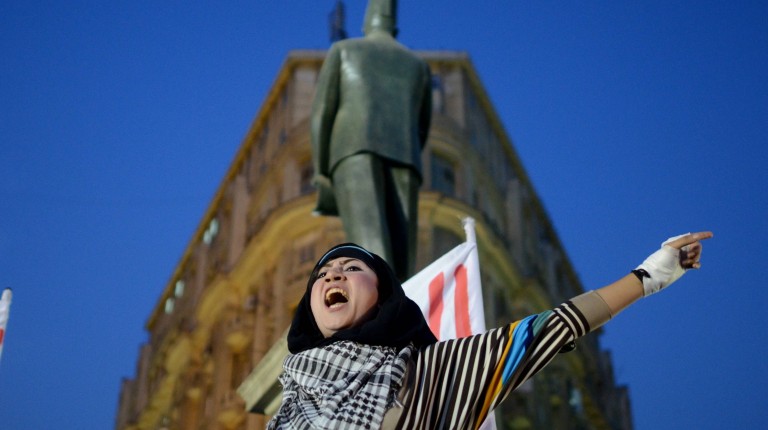 The activists were arrested under the controversial Protest Law. The law has garnered much criticism for giving authorities sweeping powers to ban demonstration or public meetings through arbitrary security force decisions.

“It’s back to business as usual in Egypt, with the Egyptian government brazenly trampling on the rights of its citizens and Western governments supporting it,” said Sarah Leah Whitson, Middle East and North Africa director of HRW.

“The Al-Sisi government will clearly go to any length to crush domestic opposition, whether secular or Islamist.”

The defendants were kept “in pretrial detention”, a tactic the EIPR say is used against political prisoners to send “a chilling message that no criticism of the government will be tolerated”.

HRW mentioned there were hundreds of detainees held by security forces under the present law.

The EIPR said the law infringes on Egyptians’ constitutional right to freedom of assembly and expression “allowing for the imprisonment of thousands of suspected political dissenters from across the political spectrum”.

The organisation highlighted the trials of human rights defenders, journalists, and peaceful protesters in the past few months.

Egyptian security forces have detained at least 41,000 over the past year, according to the online database, WikiThawra.

Yara Sallam, a researcher for the EIPR and among those sentenced, was questioned about her relationship with the organisation the EIPR said.

“Sallam’s indictment and conviction are linked to her human rights work,” the EIPR said. “The sentence comes amid escalating measures by the government that are effectively shutting down democratic means for citizens to voice grievances.”

Both Amnesty International, HRW, and the EIPR pointed out lack of evidence for the conviction of Sallam and the other protesters. They also noted inconsistencies in police reports, lack of physical evidence, or any credible witness testimony.

“Audiovisual material presented by the prosecution provided no evidence of defendants’ engagement in any violent acts,” the EIPR said. Hassiba Hadj Sahraoui, deputy director of Amnesty’s Middle East and North Africa Programme said: “Egypt must drop the farcical charges against Yara Sallam, who did not even participate in the protest in question.”

She added: “The disturbing truth is that she appears to have been put on trial solely because of her human rights work. She is a prisoner of conscience and must be released immediately and unconditionally and all charges against her dropped.”

The law was issued in November 2013 by then-interim president Adly Mansour.

The defendants face three years imprisonment and a EGP 10,000 fine. The defence plans to appeal the ruling.

The human rights groups have called on the government to repeal or amend the protest law, which so far has gone unheeded.

The condemnation also included that from Al-Tayar Al-Sha’aby, led by Hamdeen Sabahy, which has reiterated their rejection of the protest law in different statements.

The movement stresses the importance of releasing all detainees charged under the Protest Law as it is unconstitutional. They called for its amendment according to proposals by the National Council for Human Rights, which guarantees the right of peaceful demonstrations.

It warns, as well, against the escalation which will be a result of the continuous tightening of freedoms which has become evident since the beginning of the academic year and the violence in universities.