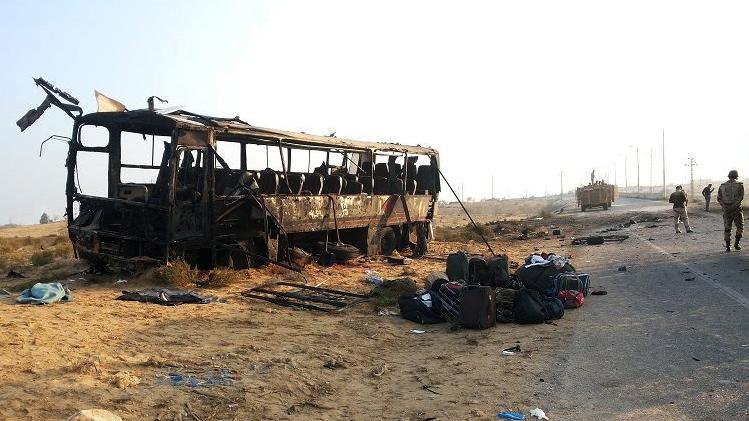 A video said to belong to Ansar Beit Al-Maqdis was released on Sunday showing footage of the deadly car bomb explosion that targeted a military bus in North Sinai on 20 November.

The car bomb explosion which targeted a military convoy made up of four buses preceded by an armoured personnel carrier and followed by one, killed 11 and left 37 injured.

The footage could not be independently verified by the Daily News Egypt but it closely matches a graphic recreation released by military spokesperson Ahmed Ali’s official page. The military has described the explosion as a terrorist operation and affirmed the army’s determination to continue to fight “black terrorism.”

But while the military spokesman’s page has said the operation involved two suicide bombers, the alleged Ansar Beit Al-Maqdis video states that the explosion was via remote, which is unlikely since the road where the explosion went off is not in an area with cell phone coverage.

The footage then shows the explosion shot from several different angles, some distance away from the explosion. A white car which eventually explodes is parked on the side of the road. After the armoured personnel carrier passes the white car, it explodes just when the first bus in the convoy is adjacent to it.

When footage of the third angle is played, a voice from behind the camera can be heard yelling “Allahu Akbar (God is Great)” and firing in the air once the bomb goes off.

Ansar Beit Al-Maqdis has claimed responsibility for several explosions in recent weeks. The most recent was when the group said on 19 November that it was responsible for the assassination of high-ranking Homeland Security officer Lt. Colonel Mohamed Mabrouk. It has also claimed responsibility for the failed assassination attempt on Minister of Interior Mohamed Ibrahim as well as for the military intelligence building bombing  in Ismailia; both incidents took place in October.

A military funeral was held for the 11 people who died, followed by a speech by Defence Minister Abdel Fatah Al-Sisi in which he repeated that the “fall of these martyrs, will only increase our determination.”  He added that they fell in the “confrontation of terrorism.”