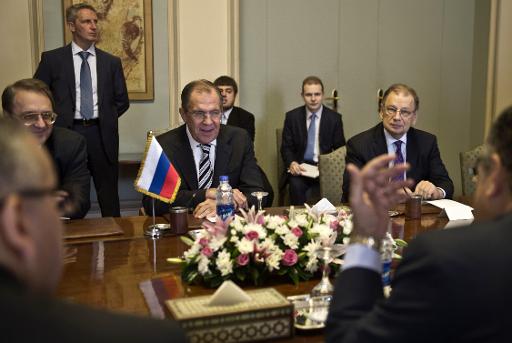 Fahmy stated that Russia is “not a substitute for any other state,” adding that cooperation agreements have been reached in the fields of economy and development.

In a press conference held in the Ministry of Foreign Affairs, Fahmy described the visit as “historic” and “the first of its kind”.

Fahmy announced that another meeting between the foreign and defence ministers of both states is set to take place later Thursday.

Lavrov is also expected to have a meeting with interim President Adly Mansour while Russian Minister of Defence Sergei Shoigu will meet General Abdel Fatah Al-Sisi.

The talks were the first at such a high level between the two countries “in the history of our friendly relations,” Russian foreign ministry spokesman Alexander Lukashevich said last week.

Lukashevich said the discussions would address “military and technical cooperation” as well as political and economic ties.

“Although military cooperation was the key issue within the meeting, several other issues were discussed, such as the economic cooperation between our two states”, Fahmy said, adding that “we welcome the increased numbers of Russian tourists visiting Egypt”.

The meeting also resulted in an agreement to form a Russian-Egyptian ministerial committee to reach agreements regarding development in different areas.

Lavrov highlighted the importance of allowing autonomy in decisions, saying: “Egypt controls its own destiny and as a state we do not intervene in internal affairs of countries.”

“There is a relationship between Russia and the Egyptian people that had been built over decades,” he added.

Lavrov stressed on ending the rhetoric and belief that influential states affect internal relations, refusing to comment on the allegation of Russia becoming a substitute to the United States in the region.

The US state department announced on 9 October that it would halt the delivery of large-scale military systems and cash assistance to Egypt’s government, pending “credible progress toward an inclusive, democratically elected civilian government through free and fair elections”. The decision comes as part of “recalibrating” US aid to Egypt.

Tension between Egypt and the US increased  after this decision, raising questions of whether Russia, as an ally to the US, is acting as its substitute. A reported arms deal is in progress to replace the recent military aid that was suspended by the US.

Lavrov welcomed the end of the state of emergency, adding that “Egypt is following the right democratic path  with the constitution finalising and a referendum coming up.”

The meeting also revolved around key regional and international issues, including the situation in Syria and the peace process between Palestine and Israel.