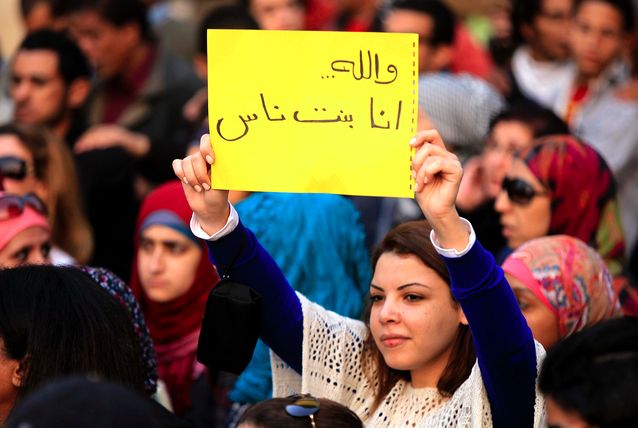 Egypt has been ranked the worst country in the Arab League states for women’s rights, according to a recent poll conducted by Thomson Reuters conduct a poll on women’s rights, with Comoros rated as the best.

The study was based on a 36 question survey, nine of which asked about the respondents’ name, age, sex, profession, employer and country of employment.

The poll tackled the 22 countries based on six different categories. First, “Women in politics” calculates women’s civil representation and presence in high public positions. “Women in society” measures tradition and cultural expectations of women and their limitations when participating in society. “Women in the economy” also evaluates their participation in the workforce and if they earn as much as a man.  “Women in the family” assesses women’s right to refuse or accept marriage, at what age and their rights when separated. “Reproductive rights” generally calculates their rights in accessing healthcare and in childbearing. Finally, “Violence against women” assesses the levels of sexual assault and physical violence women suffer from in each country and whether the offender is punished.

The majority of the countries surveyed had signed or ratified the UN Convention on the Elimination of Discrimination Against Women (CEDAW), which Egypt ratified in 1981.

Poll results show that Egypt suffers from the highest rate of sexual harassment of women in the Arab League states and the world in general, with 99.3% of women said to suffer from sexual harassment. Further, less than one percent of women who ran for elections in 2012 were actually elected. In Egypt, Muslim women are not allowed to marry non-Muslim men or they risk being criminally convicted of apostasy or turning their back on their faith.

Meanwhile, women in Lebanon, ranked 16 of 22, are not allowed to transfer their Lebanese citizenship to their foreign born children. In Mauritania, ranked 11 of 22 69% of women had to undergo female genital mutilation around the average age of one month old. Since only 2009 in Tunisia, ranked 6 of 22, non-Muslim women were allowed to inherit from their Muslim husbands. Even in Comoros, ranked first in the survey, 50% of all convicts are held for crimes related to sexual assault.

Abeer Aboul -Ella, the media advisor for the National Council for Women in Egypt expressed her “deep sorrow” for the state of Egyptian women in politics and in society, as shown in the poll.

“They refuse to give us a quota in parliament, which is the only way that will ensure our representation,” Aboul-Ella said, also lamenting the lack of women’s rights in the constitution that is currently being drafted. “Women are the one who pay the price of revolutions. When their fathers, husbands or sons die, they carry the burden of the family.”

The problem with sexual harassment in Egypt, according to Aboul-Ella, is that the law condemning the offender “is not strong enough, so the Ministry of Interior cannot take serious action.” Another law is currently being drafted but “we have to wait until it is approved by the parliament and there is currently no parliament, and so our hands are tied.”

Mozna Hassan, head of the women’s rights organisation Nazra for Feminists Studies, said that people should not be so “shocked” that the results of a poll done by an international media agency such as Reuters showed that women’s rights in Egypt are so dismal, given the increasing violence against women and growing marginalisation. “It is as if people want to only to maintain Egypt’s image on an international level,” she said, but added that ranking Egypt after countries like Saudi Arabia,  where there is absolutely no participation of women on the political sphere, and Yemen, where girls marry at the ages of eight and nine is “madness”.

Hassan also criticised the fact that the poll used CEDAW values as a guide given that not all countries ratified it and those who did added reservations. Given the political circumstances of Egypt and the Arab world in general, she said, issuing such a poll at this time is “peculiar”.