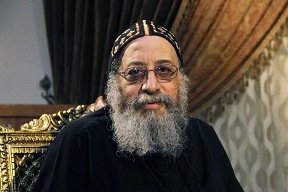 The cabinet expressed on Monday “deep sorrow” regarding the sectarian violence that broke out in the Beni Suef village of Diabiya on Sunday.
“The cabinet stressed its condemnation of all forms of violence and incitement, which causes strife between the sons of one homeland,” read the cabinet’s statement.
“The cabinet reiterates that the government will address it with all resolution and rejects attempts to sow discord and spread sedition.”
The cabinet called on Egyptians to be aware of “attempts made by some” to disrupt national unity. The statement also said the cabinet had decided to restructure the Supreme Council for Justice and Equality, a body that was established under former prime minister Essam Sharaf in 2011 and reactivated under ousted president Mohamed Morsi’s prime minister Hesham Qandil following violence at the Coptic Cathedral in April.
“I appeal to all to preserve [the] lives of fellow Egyptians with restraint to prevent violence and reckless attacks against any person or place,” said head of the Coptic Orthodox Church Pope Tawadros II on his Twitter account on Monday.
Restructuring the council, according to the statement, would involve developing mechanisms to intervene rapidly in social strife in coordination with the security apparatus, which has been criticised for being slow to respond to sectarian violence, especially in Upper Egypt.
A fight in the village of Diabiya broke out on Sunday after a dispute resulting from a Christian resident building a speed bump in front of his house, according to statements from pastor of the local church, Father Rizkallah Joudra to state-owned Al-Ahram.
An altercation started between the Christian and a Muslim neighbour and the situation escalated when “extremist Muslims,” according to the pastor, attacked Christian homes and stores with molotov cocktails, burning six homes.
The village’s church was also attacked and ransacked. At least 15 people were injured, according to Al-Ahram.
The Beni Suef Security Directorate reportedly received notification that members Al-Jamaa Al-Islamiya were involved in the clashes, an accusation the group denied, while condemning attacks on innocent residents and burning places of worship.
A reconciliation meeting between Christians and Muslims took place on Sunday in the village of Beni Ahmed in Minya. The terms of the reconciliation involved residents dropping charges filed against each other and the expulsion of anyone from the village who attempts to inflame the situation.
In comments made to state-owned Al-Ahram, Bishop Makarious, General Bishop of Minya, criticised the reconciliation, which did address compensation of approximately EGP 3.5m for damaged Christian property, asking where security and state institutions were to protect its citizens.
He also criticised the actions taken following the violence as focusing on overcoming the current situation and doing nothing to take necessary steps and precautions to prevent similar incidents from reoccurring.
The bishop said it was not “logical” for the Church to absorb the costs of the damages and losses, and that such matters should be the responsibility of the state.
The Maspero Youth Union (MYU) also rejected the reconciliation meeting and “any attempts to destroy the sovereignty of the state.”
“Such terms,” said the group regarding the outcome of the meeting in Minya, “represent the shame and disgrace over the heads of everyone who participated in this farce.”
The group also condemned the role of the security apparatus and even priests who took part in the reconciliation meeting in which they said they “accepted the waiver of applying the law, ignoring [compensation for] those affected…”
The Coptic rights group demanded an end to “so-called customary reconciliation sessions” and called on the state to apply the law fairly against perpetrators of violence.
“We wait for the judiciary to stand against those terrorist acts as he [they] stood against the injustice done to him [them],” said MYU.
Attacks on churches and Christians have increased since Mohamed Morsi’s ouster on 3 July across the country including Luxor, Sinai, Minya, Beni Suef, Sohag, and Port Said.
Four Christians were left dead when violence broke out in Luxor last month. In Sinai a Coptic Orthodox priest was shot dead, while a Christian man was kidnapped and found beheaded.
Police arrested a suspect accused of participating in a shooting at the Mar Girgis Church in Port Said last year, in which two were killed.
The Egyptian Socialist Party released a statement on Monday saying that the state should not tolerate “the practice of hatred, murder, and terrorism against Coptic citizens,” calling on the authorities to depart from its practice of complacency when dealing with such events and calling those who spread hatred against Copts “traitors.”
Earlier this month 16 human rights organisations called for Islamist groups to stop inciting violence against Christians and held the state responsible for their protection.