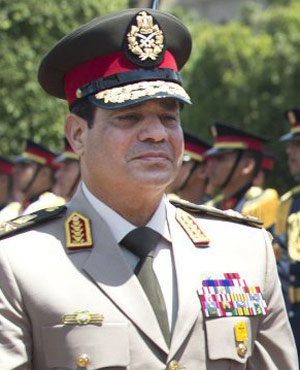 A fact-finding delegation from the African Union (AU) met on Tuesday with Minister of Defence Abdel Fatah Al-Sisi.

The delegation arrived in Cairo on Sunday to meet with the leadership following the country’s suspension from all union activities.

The delegation was scheduled to meet with representatives from the National Coalition to Support Legitimacy (NCSL) on Tuesday. Mohamed Soudan, Freedom and Justice Party (FJP) spokesman in Alexandria, said the delegation was visiting to further investigate the “massacres” taking place in the country.

At least 53 civilians were killed in clashes which occurred between supporters of ousted president Mohamed Morsi and security forces outside the Republican Guards headquarters on 8 July. On Saturday, violence broke out near the pro-Morsi Rabaa Al-Adaweya sit-in leaving at least 80 protesters dead.

“The delegation is here to know more about the massacres, meet with the victims, see the protesters who have been sitting-in at Rabaa for 31 days,” Soudan said. The delegation is expected to meet coalition members at the Rabaa sit-in.

Soudan said the NCSL supports the AU’s decision to suspend Egypt’s membership from all union activities.

The delegation also met with representatives from the Tamarod rebel movement and 6 April youth movement founder Ahmed Maher on Monday.

In a statement released on Monday, 6 April said Maher explained to the delegation members that what happened starting from 30 June was “the third wave of the January 25th revolution.”

Mai Wahba, Tamarod media coordinator, said she believed relations with the AU would take a positive turn after the delegation’s visit. Wahba was one of the Tamarod representatives who met with the delegation.

“The delegation members explained that suspending Egypt’s activities was only a precautionary measure taken due to the frequency of coups which took place in Africa,” Wahba said.

The delegation is chaired by Alpha Omar Konaré, a former president of Mali who also chaired the African Union Commission from 2003 to 2008, and includes the Prime Minister of Djibouti and a special representative from the office of the Botswanan President.

The delegation had already met with Foreign Minister Nabil Fahmy on Sunday.

The commission is due to present a report of their findings to AU chair Nkosazana Dlamini-Zuma in the coming weeks.