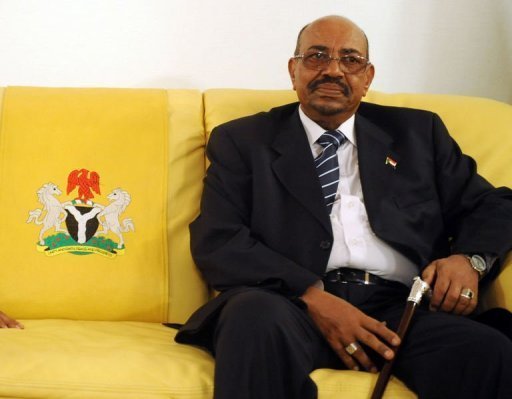 AFP – Sudan’s President Omar Al-Bashir has left Nigeria with the International Criminal Court (ICC) demanding his arrest, but Sudanese officials denied Tuesday that the departure was due to the warrants against him.

Controversy had swirled over Al-Bashir’s visit, and the ICC issued a statement on Tuesday confirming it had requested that Nigeria arrest him on charges of war crimes, crimes against humanity and genocide.

Al-Bashir left on Monday, a Sudanese embassy spokesman said, although the African Union health summit he was attending in the Nigerian capital Abuja was not due to end until Tuesday.

The spokesman, Mohammed Moiz, told AFP that Al-Bashir had returned to Khartoum for another engagement, but gave no further details. He had arrived on Sunday.

Sudan’s ambassador to the African Union also said Al-Bashir’s departure was not due to calls for his arrest, adding he would “never flee.”

The Hague-based ICC in 2009 and 2010 issued two warrants against Bashir for war crimes, crimes against humanity and genocide over the conflict in Sudan’s Darfur region.

The ICC said that its pre-trial chamber on Monday “requested the Federal Republic of Nigeria to immediately arrest Sudanese President Omar Al-Bashir and surrender him to the ICC.”

It added that Nigeria, as a member of the court, had an obligation to arrest wanted suspects.

Should Nigeria fail to comply “the court may make a finding and refer the matter to its Assembly of States Parties or the [UN] Security Council,” the judges warned.

Nigeria’s presidency had defended welcoming Al-Bashir to the country for the summit on Monday and Tuesday despite the charges against him, saying it cannot interfere in AU affairs.

Some African Union members and officials have criticised the Al-Bashir indictments, and the body has passed a resolution calling on members not to cooperate with the warrants.

Rights activists harshly criticised Al-Bashir’s visit and said they were planning to go to court to try to force Nigeria to arrest him.

Britain’s minister for Africa, Mark Simmonds, also said Nigeria’s decision to host Al-Bashir “undermines the work of the ICC and sends the victims a dismaying message that the accountability they are waiting for will be delayed further.”

Al-Bashir has previously visited ICC member states, including Chad, Djibouti and Kenya, but countries like South Africa and Botswana have ensured that he stay away.

Human Rights Watch has said the AU resolution to ignore the warrants has “no bearing on Nigeria’s obligations as an ICC member.”

Hosting Al-Bashir is an “affront to victims” of the Darfur conflict, said Elise Keppler of Human Rights Watch.

The court has been accused by some of unfairly targeting Africans, while others have argued that the arrest warrants against Al-Bashir complicate peace efforts.

Rights activists say that the vast majority of current investigations came about because the governments where the crimes were committed asked for the court’s involvement or the UN Security Council referred the situation due to the gravity of the crimes.

“How can the court be targeting if they are responding to direct requests from governments affected or the council?” Keppler said.

She added that “even though the claim of targeting flies in the face of the facts, it continues to have great resonance in public debate likely due to the damaging legacy of colonialism, and it is being leveraged and manipulated to undercut efforts to give access of African victims to justice.”

Government forces and local Arab militias were pitted against rebels drawn mainly from non-Arab populations in the conflict in the Darfur region.

In 2008, the United Nations estimated that 300,000 people had died because of the conflict, but Khartoum disputes the figure.