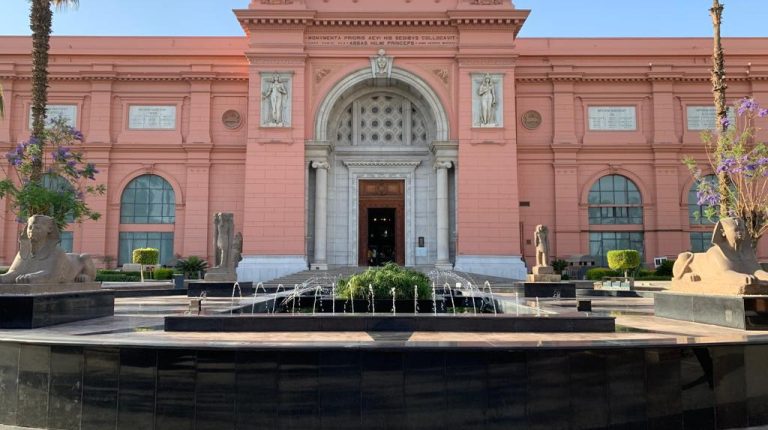 To celebrate the 120th anniversary of its opening, the Egyptian Museum in Tahrir Square is organising a temporary archaeological exhibition for the artefacts in its museum basement.

Moamen Othman — Head of the Museums Sector at the Supreme Council of Antiquities — explained that the exhibition will continue for a month to display a group of rare artefacts that are being displayed for the first time at the entrance to the museum, including the lid of a wooden coffin from the late period of a woman named Isis-Wort and her mummy.

The lid depicts scenes from the Book of the Dead, including a view of the trial of the deceased and the weighing of the heart, and another view of the mummification process, where the mummy was completely shrouded, except for the head, which was covered with a gilded mask with a winged scarab pushing a sun disk depicted on top of it.

The exhibition also includes the head of a limestone statue, probably of Queen Tiye — the wife of King Amenhotep III and the mother of King Akhenaten — wearing a thick wig and a headdress in the shape of an eagle spreading its wings from the days of the New Kingdom.

For her part, the Museum’s Director General, Sabah Abdel Razek, added that on the side-lines of the celebration of the 120th anniversary, the museum’s trustees will accompany visitors on free guided tours inside the museum’s halls to shed light on the most prominent artefacts in it.

Khedive Ismail approved a project to establish a museum of Egyptian antiquities in 1863 based on an idea suggested by French Egyptologist Auguste Mariette in 1858.

The khedive first chose Bulaq to be the location of the museum, however, it was then transferred to the Ismail Pasha Palace in Giza and then one last time to its current location in Tahrir Square.

On November 15, 1902, khedive Abbas Helmy II officially opened the Egyptian Museum, and since then, it has included the largest archaeological collection in the world that expresses all stages of ancient Egyptian history, from prehistoric times to the Greco-Roman eras.

Moreover, the museum’s upper floors include various archaeological collections, the most important of which are the Yuya and Thuya collections, the treasures of Tanis, a large number of animal and bird mummies, in addition to artefacts that express daily life, writing, and religion in ancient Egypt.