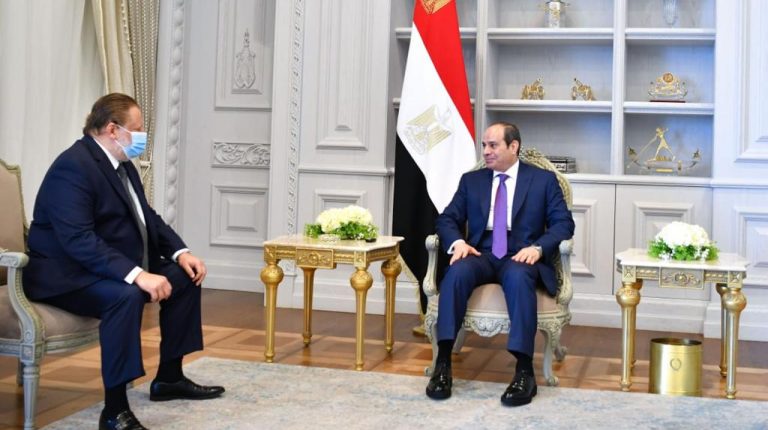 Al-Sisi met with Abdalla, and stressed the need to develop monetary policy in line with the ongoing global developments, diversify sources of foreign currency, and to provide an attractive investment climate.

Abdalla was the president of the United Media Services, and before that he was the CEO and Vice President of the Arab African International Bank (AAIB).

He started his career at the AAIB in 1982, the first multinational bank in Egypt, and worked in several sectors, including money and futures markets.
In 1988, Abdalla moved to the AAIB’s branch in New York City to manage the treasury portfolio and hedging policies for a year, before returning to Cairo. In 1994, he was promoted to Assistant General Manager.

Abdalla worked as the General Manager of the AAIB from 1999 to 2002. Then, he was appointed as Vice Chairperson and Managing Director of the bank. During this period, the entire banking sector witnessed great financial suffering and difficulties due to bad debts and weak infrastructure, after which the banking reform plan was launched in 2003.

He played a major role in the process of merging Misr America International Bank with the Arab African Bank in a deal valued at about EGP 240m, which was announced in May 2005 to be the first experience of its kind in the private sector in Egypt. It contributed to the strengthening of the AAIB and its spread in the local banking market.

After the 10-year acquisition, Abdullah succeeded in leading the bank to acquire the Canadian Bank of Nova Scotia portfolio in Egypt in 2015.
Abdalla has served as board member of several entities, including the Institute of International Finance, the Emerging Markets Advisory Council (EMAC), the Central Bank of Egypt, the Egyptian Exchange, Ghabbour Auto, Coca-Cola, Endeavor Egypt, Telecom Egypt, and Orascom Construction.
He also served as a faculty member at the American University in Cairo (AUC), and a member of the Strategic Advisory Board at the College of Business Administration at the AUC.

The new CBE governor will face a lot of difficult files, on top of which is good coordination between the fiscal and monetary policies, the exchange and interest rates, and controlling inflation.

These files also include negotiating with the International Monetary Fund over financial reforms, and solving importation problems, meeting the needs of production requirements, maintaining and increasing foreign exchange reserves, and fulfilling external obligations.