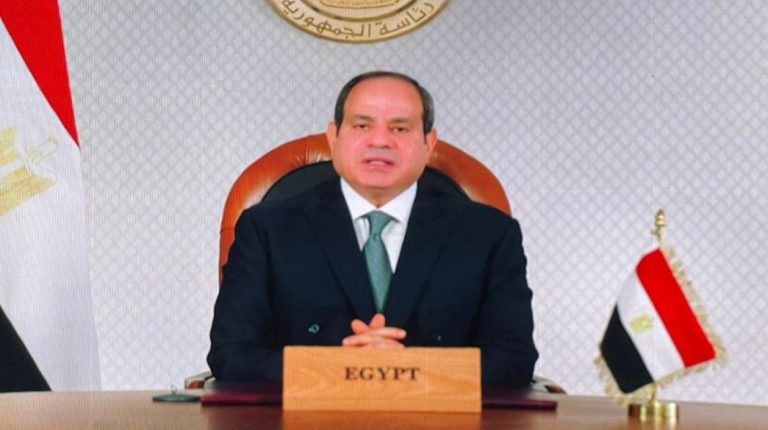 President Abdel Fattah Al-Sisi said that Egypt seeks to develop a common vision on peace and sustainable development in Africa through the Aswan Forum for Sustainable Peace and Development.

He also stressed the need to strengthen cooperation between the countries of Africa to face the current challenges through initiatives that aim to find effective and innovative solutions that enable overcoming the difficulty of current conditions in order to achieve the aspirations of the peoples of the continent.

This came in a video speech addressed by Al-Sisi to the third session of the forum, which launched on Tuesday under the title ‘Africa in an era of successive risks and climate vulnerability: Paths to a peaceful, resilient, and sustainable continent’ and will last for two days.

The president pointed out that Egypt was keen to establish the Sahel-Sahara Centre to combat terrorism and serve the peoples of the region; it also seeks to build the capacities of African institutions in the affected areas.

He explained that the Aswan Forum has become an African platform through which various threats and challenges facing the continent are discussed and common visions are crystallised that document the relationship between peace and sustainable development.

Furthermore, Al-Sisi highlighted in particular the food crisis currently taking place in Africa and its serious repercussions on the safety and stability of our societies, which requires taking a package of urgent and effective measures in coordination with international partners and the international community to support African countries in containing its effects.

The president also pointed out that the holding of the third edition of the forum is a lead-up to Egypt’s hosting of the UN Conference of Parties on Climate Change (COP 27) in Sharm El-Sheikh this November and provides an important opportunity to highlight the role played by climate change in doubling the challenges of peace and security in Africa.

Al-Sisi stressed that the holding of the Aswan forum this year provides an important opportunity to continue to convey the voice of the African continent to all partners and actors at the international level and to push for its issues to remain high on the list of priorities of the international community.

For his part, UN Secretary-General Antonio Guterres stressed that Africa faces many challenges, foremost of which is access to food sources, warning that non-compliance with the Paris Agreement would be a disaster.

He also stressed the need for clear plans to address the problems of climate change facing the world, noting the need to support Africa in achieving its goals.

“We must provide support to African countries so that they can build their green economies,” he added, stressing that the UN stands by everyone in the journey to a better future.

As for Moussa Mahamat — Head of the Africa Union Commission — he pointed out that the commission has developed a strategy to be applied at the 2022 AU Summit that will increase green spaces, and an action plan to be applied during the current year to recover from the COVID-19 pandemic, as well as fostering a number of rapid partnerships to strengthen the continent in a sustainable way.

He added that this strategy works to strengthen developing countries in the context of a number of negotiations and the implementing of a number of plans that are in line with the COP 27, reducing carbon emissions, and working to develop special financing items, especially companies and projects in least developed countries.

Earlier, the third edition of the Aswan Forum kicked off with a speech by Minister of Foreign Affairs Sameh Shoukry, in which he stressed the importance Egypt attaches to this forum, which embodies the ownership of the continent’s people of their destiny and their leadership in offering comprehensive and effective solutions to address the challenges facing the continent in cooperation with various partners