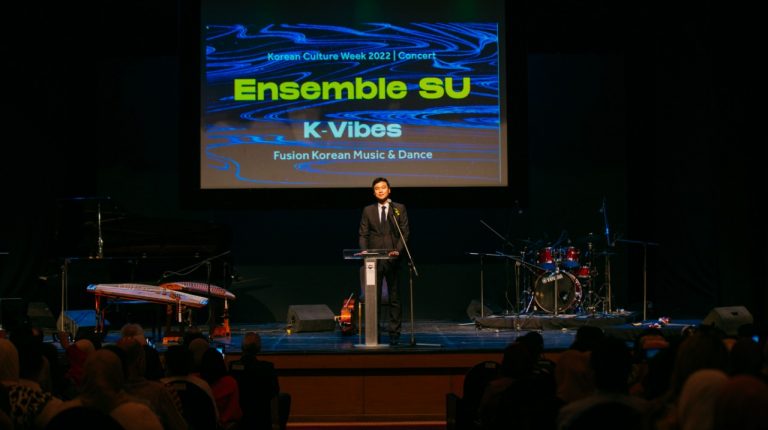 The bilateral relations between South Korea and Egypt are witnessing tremendous developments and great momentum, especially in recent times, according to Hong-Jin Wook, Ambassador of South Korea to Egypt.

The ambassador noted that the Korean Cultural Center strives, through its various cultural activities, to introduce Korean culture and enhance understanding between the peoples of the two countries.

His remarks came at the conclusion of South Korea’s cultural week on Monday, which witnessed a massive musical celebration at the Egyptian Opera House, amidst a large audience and a diplomatic and cultural presence.

The Ensemble ~su group presented a group of Korean musical pieces that mix traditional and modern tabloids, in addition to a number of artistic performances.

For his part, Ambassador Ayman Kamel, Assistant Foreign Minister for Asian Affairs, expressed his happiness at attending the closing ceremony of the Korean Culture Week in Egypt, which witnessed many important and culturally rich events.

He described the entire Egyptian-Korean relations as strong, which was reflected in the great demand on the part of lovers of Korean culture for various activities. The ambassador stressed that the last visit of the Korean President to Egypt last January added a great momentum to the relations between the two countries, pointing out that Egypt opens its arms to all visitors after life returned to normal following the receding of the Coronavirus pandemic.

The Korean Culture Week, which was organized in cooperation with the Cultural Relations Sector, the Egyptian Opera House and the Hanager Arts Center, included the Korean Art Exhibition and the K-Pop Festival.