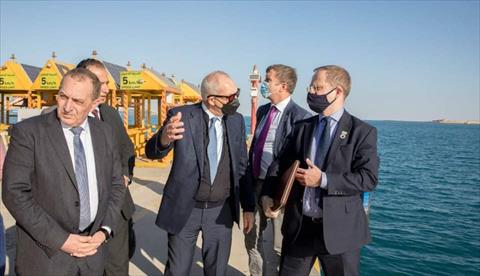 The visitors wanted to learn about the developments in the SCZone, and discuss the targeted industries in the region and its strategy to shift towards a green economy.

Zaki explained to the delegation the current development in the Ain Sokhna port using maquettes, which include the final work of the six berths and basins of various activities in Sokhna, including container terminals and other general cargo terminals, a multi-purpose station, a Ro-Ro car station, a liquid bulk station, another coal and chemical goods station, and infrastructure projects.

Topping also expressed his happiness for Egypt’s hosting of the COP 27 and its readiness to cooperate and benefit from his participation in organising the previous edition in Glasgow, the UK.

After the meeting, the President of the Economic Zone, the British Ambassador, and the United Nations Representative met with some of the region’s dealers and development and success partners to discuss business developments within the region and listen to their experiences and preparations for clean energy industry projects within the region in conjunction with the hosting of the COP 27 next November.