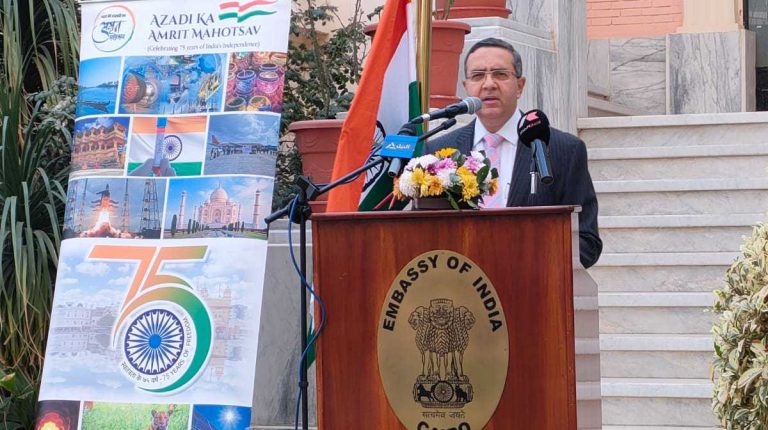 Bilateral trade between Egypt and India from April to October 2021 stood at $3.8bn, a y-o-y increase of 80%, with Egypt’s exports to India increasing by 63% during the same period and India becoming the largest export destination for Egyptian products, according to Ambassador of India to Egypt Ajit Gupte.

His remarks came during a press conference held on Wednesday on the latest developments in bilateral relations between Egypt and India.

Gupte said that the bilateral trade between Egypt and India and commerce was robust even in a year of reduced global economic activity and restrictions on movement due to the pandemic.

He revealed that during the year, eight trade delegations from India visited Egypt and that several Indian companies enthusiastically participated in various exhibitions held in Egypt for the paper, pharmaceuticals, textiles, and food processing sectors.

Leveraging technology, the ambassador said that throughout the year, numerous Buyers Sellers Meets (BSMs) were held through digital platforms when they could not be held physically.

“The bilateral cooperation in the defence sector received impetus with the visit of India’s Air Chief Marshal V R Chaudhary to Egypt and his subsequent meeting with the Commander in Chief of the Egyptian Air Force, Air Marshal Mohamed Abbas Helmy,” he said.

He revealed that in November 2021, over 10 Indian companies participated in the Egypt Defence Expo and showcased their state-of-the-art defence systems.

“The growing cooperation between India and Egypt in the defence sector is a testament to the growing level of trust and mutual understanding between the two countries.”

Gupte added that the year also witnessed vibrant cultural exchanges from both sides; a continuity of the centuries-old tradition of cultural contacts and exchanges between the two countries.

He concluded that the year 2021, in spite of the many challenges and difficulties brought forward by the pandemic and an uncertain global environment, was a highly successful and productive year for Indian-Egyptian bilateral relations, stressing that the two countries took major steps ahead to further strengthen and deepen their evolving relationship based on mutual trust and confidence.

Gupta also mentioned that the Ministers of Foreign Affairs of the two countries met on the side-lines of the United Nations General Assembly in September 2021 in New York. Reflecting on both countries’ longstanding friendship, they agreed to bolster bilateral cooperation at all levels and exchanged views on pressing global issues from the GERD to Afghanistan.