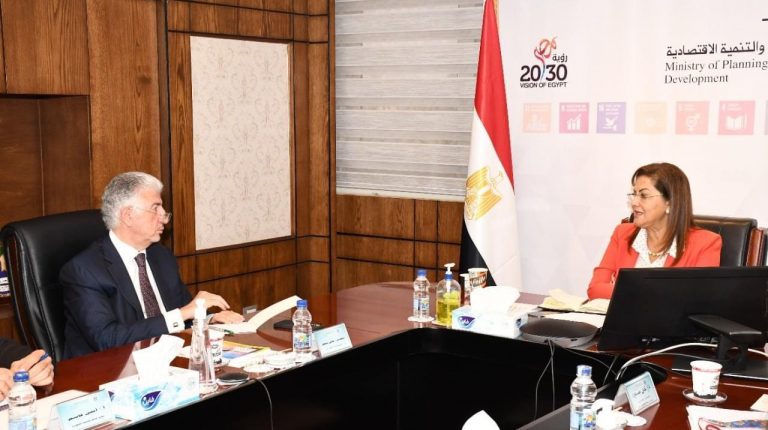 Hala El-Said, Minister of Planning and Economic Development, and Governor of Egypt at the Islamic Development Bank Group (IsDB), has received Hani Sonbol, CEO of the International Islamic Trade Finance Corporation (ITFC), to discuss boosting cooperation between Egypt and the institution.

At the beginning of the meeting, El-Said asserted Egypt’s readiness to host the next annual meeting of the Bank Group’s Board of Governors, which includes holding the annual meetings of member institutions.

On the most prominent developments regarding the existing areas of cooperation, El-Said indicated that Egypt will host the 3rd meeting of the Governance Board of the Arab-African Trade Bridges Program next December, stressing Egypt’s welcome to assume the presidency of the Program’s Governance Board exceptionally for the remainder of 2021.

El-Said also discussed a proposal to establish the first export academy in Egypt within the framework of the second phase of the Aid for Trade Program for Arab Countries (AFTIAS), in the context of Egypt’s keenness to contribute effectively to the second phase of the program by participating in various projects that serve member states.

El-Said indicated that a comprehensive vision of the Academy’s mission, vision, objectives, and affiliation have already been received from the Ministry of Trade and Industry.

She added that the vision is already being studied by the concerned persons in the Ministry of Planning and Economic Development to make observations and discuss it to finalize its formulation in preparation for presentation during the first meeting of the Technical Committee for Examination of Projects.

El-Said continued that the objectives of establishing the Export Academy are to ensure the sustainable growth of Egyptian exports by providing access to markets with promising export opportunities, encouraging the shift towards high value-added exports, and expanding the base of exporters to include small and medium enterprises.

The objectives of establishing the Export Academy are also to simplify procedures and create a business environment to serve exporters, which comes within the framework of the presidential directive that stresses that Egyptian exports will reach $100 billion over the next five years.

El-Said added that the strategic goal of establishing the academy is to establish a unified national entity concerned with training exporters and providing export advisory services in Egypt, so that the academy will be a national subordination, with the possibility of expanding its activities in the future to include regional departments and provide training and advisory services at the regional and international levels.

El-Said indicated that the proposal to establish the academy will include the dimension of promoting and encouraging virtual interactive practices in the Egyptian export system, as it comes within the framework of the proposal to create an electronic application to facilitate the training system and provide export advisory services, in line with the state’s director of digital transformation.

For his part, Hani Sonbol, CEO of ITFC, said that this meeting comes intending to follow up on the agreements that were made during the meetings of the Islamic Development Bank group in Uzbekistan early this month, in addition to forming working groups from the Corporation and the Ministry of Planning to prepare for the meeting of the Governance Council of End Bridges this year and laying out the features of the country program implemented by the Foundation with the Egyptian partner ministries.

El-Said also discussed, during the meeting, a proposal to establish an export business accelerator within the framework of the Arab-African Trade Bridges Program to support and promote export activity through e-commerce, thus achieving economic development and creating decent and productive job opportunities in the region.

El-Said noted that the” Rowad 2030” Project of the Ministry of Planning has prepared a preliminary concept for the accelerator project, and it is being studied in coordination with the Ministry of Trade and Industry and its affiliated bodies.

The Minister of Planning said that the export accelerator aims to provide a variety of support services to emerging companies in the field of e-commerce, including providing specialized training and qualification programs, which include qualifying emerging companies and training them on various methods to build and develop a distinguished product for export abroad, and how to build the product’s brand.

El-Said confirmed the integration of the accelerator project with initiatives to support e-commerce and enhance the export orientation in the region, as it is planned that the export business accelerator will receive entrepreneurs graduating from the Egyptian-African Business Incubator of the Ministry of Planning (Start-up Africa), in addition to receiving entrepreneurs from neighboring Arab and African countries.

She also indicated the integration of all projects with the existing cooperation activities between the Foundation and the various Egyptian bodies to digitize shipping documents and documentary credits by launching interactive electronic platforms for this purpose.

Regarding new prospects for cooperation between Egypt and ITFC; El-Said pointed out the possibility of the Foundation’s contribution to some projects within the framework of the economic empowerment dimension of the national project for the development of the Egyptian family, especially the aspect related to women’s development, as this dimension aims to enable women in the age group from 18 to 45 years to contribute to the labor force and achieve financial independence.

El-Said added that the project includes an activity aimed at equipping and operating 200 sewing workshops in family health and development units, by providing production training on the line of medical textiles to meet the needs of hospitals and health facilities.