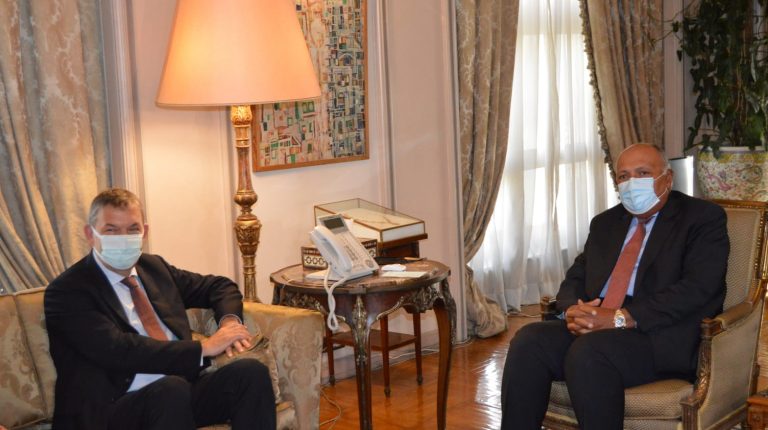 During the meeting, the two ministers affirmed their keenness to continue strengthening bilateral relations in various fields, which is reflected in the size of the momentum witnessed by the Egyptian-Sudanese relations.

They also agreed on the importance of focusing on strategic projects between the two countries, which would advance efforts to achieve integration between Egypt and Sudan.

Minister Shoukry also highlighted Egypt’s firm commitment to supporting the transitional phase in Sudan, and standing by the aspirations of the Sudanese people to achieve the desired progress

and prosperity, within the framework of the unity of destiny and the eternal ties that link the peoples of the Nile Valley.

The meeting dealt with a number of African and Arab issues of common concern, as well as the meeting of the regular session of the Council of the Arab League at the ministerial level, scheduled to be held on Thursday.

The two ministers stressed the importance of continuing the ongoing efforts to achieve the strategic partnership between the two countries in a way that achieves mutual benefit.

In another meeting, Shoukry received Philip Lazzarini, Commissioner-General of the United Nations Relief and Works Agency for Palestine Refugees (UNRWA).

He affirmed Egypt’s constant keenness to support UNRWA and its important role in supporting the Palestinian refugees in its various areas of work, and looking forward to continuing close cooperation with the Agency in order to alleviate their suffering, especially in light of the challenges the region is witnessing and the continuing consequences of the coronavirus pandemic.

Shoukry stressed the importance of ensuring that UNRWA can continue to carry out its humanitarian and relief responsibilities.

He also touched on the Egyptian efforts related to supporting the brothers in the Palestinian territories, and the importance of the international community playing its role in dealing with the challenges facing the Palestinian people.

For his part, Lazzarini valued Egypt’s role and its tireless and continuous efforts to support the Agency and the Palestinian refugees. Minister Shoukry briefed him on the latest developments related to UNRWA’s work, expressing his aspiration to continue coordination and consultation with the Egyptian side in a way that contributes to achieving UNRWA’s goals and continuing its work.