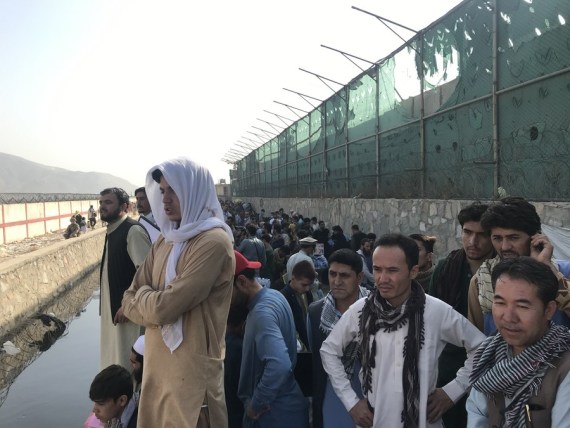 The United States’ irresponsible pullout has caused chaos and “catastrophe” in Afghanistan, and is condemned by world leaders and officials.

Russian President Vladimir Putin said that the Taliban’s sweep across Afghanistan shows the futility of the West’s efforts to enforce its democratic vision, after his talks in Moscow with visiting German Chancellor Angela Merkel on Friday.

“It is necessary to end the irresponsible policy” of the United States “to impose one’s external values from the outside, to build democracies in other countries according to external principles, without taking into account historical, national or religious specificities and completely ignoring the traditions by which other peoples live,” said Putin.

Slovenian Prime Minister Janez Jansa said in a Twitter post that the chaos in Afghanistan is “the greatest defeat for NATO (North Atlantic Treaty Organization) in history,” and the United States leaving Afghan allies to the Taliban has been a “shameful act.”

British Secretary of Defense Ben Wallace said the U.S. decision to pull its troops out of Afghanistan was a “mistake,” adding that the U.S. withdrawal “causes a lot of problems and as an international community, it’s very difficult for what we’re seeing today.”

Following the Taliban’s takeover of the Afghan capital on Aug. 5, thousands of Afghans have flocked to the Kabul airport to try and leave the country. Heavy casualties have been caused by gun shootings and stampedes in the airport, while Western nations have been scrambling to speed up evacuations from Afghanistan.

The fall of Kabul to the Taliban and the chaotic evacuation shows that Europe needs to develop its own military capacity independent of the United States, European Union foreign affairs chief Josep Borrell told media.

Former Italian General Giorgio Battisti, who commanded Italy’s contingent in Afghanistan in 2001, told media on Friday that NATO’s retreat came at the wrong time, adding that the U.S. air base at Bagram should have been left in operation during the withdrawal to help evacuate civilians.

If U.S. President Joe Biden “truly has no regrets about his decision to withdraw, then he is disconnected from reality when it comes to Afghanistan,” Republican Senator Lindsey Graham said on Twitter.

“We have never seen an American leader abdicate his responsibilities and leadership like Joe Biden has. He’s in hiding … Where is Joe Biden?” said Republican Representative Jim Banks