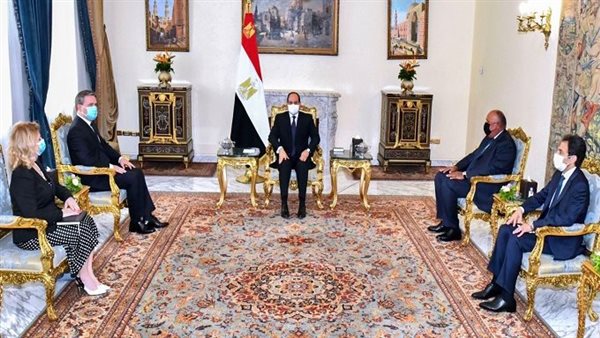 The Egyptian President praised the historical relations with Serbia over more than one hundred years, which witnessed constructive and fruitful cooperation between the two sides, whether at the bilateral or international levels.

He noted that the two countries founded the Non-Aligned Movement (NAM) in the 1960s, and that Egypt aspires to strengthen the progress of those relations between the two friendly countries at various levels, and to increase the rates of trade and economic exchange.

Al-Sisi touched on the major development projects being implemented in Egypt, and the huge investment and industrial opportunities it provides, as well as the possibility for Serbian companies to benefit from a group of trade agreements linking Egypt with Arab and African countries.

For his part, the Serbian Foreign Minister affirmed his country’s keenness to continue coordination and consultation with Egypt in various fields, as well as looking forward to developing and strengthening its relations with Egypt.

He also praised the Egyptian efforts to achieve security and stability in its regional surroundings, stressing keenness to continue cooperation with Egypt at various levels to address the challenges facing both sides of the Mediterranean Sea.

In this context, he praised Egypt’s efforts to strengthen bridges of dialogue between African, Arab and European countries, as well as efforts to combat extremism and establish principles and values ​​of acceptance, freedom of choice, and tolerance.

Later, Minister Shoukry and Silakovic held a press conference, where the former affirmed that the two countries explored enhancing cooperation in many fields, especially the economic sector.

Shoukry pointed out that the challenges facing the Middle East were addressed, and there was a focus on strengthening relations between Egypt and Serbia, which are characterized by strength and solidarity.

He made clear that there is a common desire to enhance joint relations amid great consensus on regional and international issues.

Shoukry stressed the importance of solidarity among the members of the NAM to achieve common interests by interacting in all international forums.

He noted that President Al-Sisi received an invitation to participate in the celebration that Serbia will organize on the occasion of the sixtieth anniversary of the founding of the NAM.

For his part, Silakovic confirmed that he conveyed a message from the Serbian President to President Al-Sisi, pointing out that there is an effort to deepen bilateral relations at various levels in various fields.

Silakovic pointed out that the meeting of the joint economic committee will be organized by the end of this year, in addition to organizing the joint business council between businessmen in the two countries in light of the existence of opportunities for cooperation in a number of different fields that can deepen the partnership.