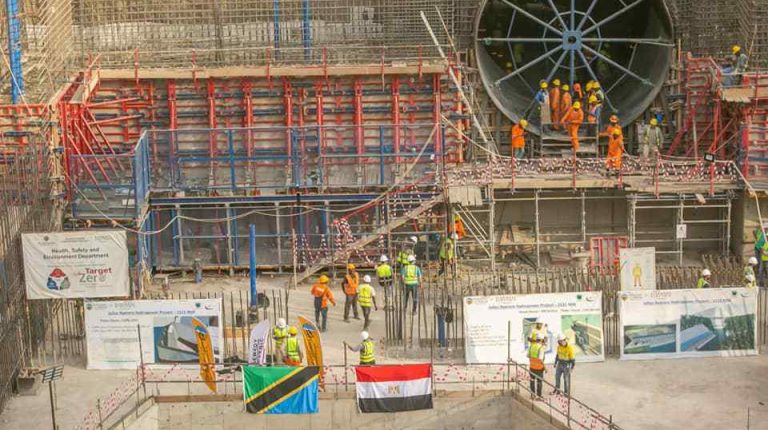 An Egyptian consortium started the installation of the first turbine to generate hydroelectric power at the Julius Nyerere Station in Tanzania, Egypt’s Minister of Housing, Utilities and Urban Communities Assem El-Gazzar announced on Wednesday.

The consortium consists of the Arab Contractors and Elsewedy Electric companies.

El-Gazzar added that this step comes after the completion of the civil works required to install the turbine, while civil works are carried out on other turbines in parallel. Total of nine turbines will be installed in the station, whose capacity will reach 2,115 MW, with each turbine producing 235 MW.

Meanwhile, Sayed Farouk, Chairperson of the Arab Contractors, said that the project is going on regularly, and according to the plan and that all workers are aware of the importance of this project to achieve the dream of the Tanzanian people.

Farouk expressed appreciation for the support provided by the Egyptian government through supervision and follow-up by the Ministry of Housing, noting that 158,000 cubic metres of concrete was recently poured into the dam’s body within 20 days, in order to take advantage of the current dry season.

The total amount of compacted concrete poured in the project is about 685,000 cubic meters since the diversion of the river on 18 November 2020, this came in addition to the temporary dam works to retain water, which required 85,000 cubic meters of concrete.

The project aims to control the flooding of the Rufiji River in eastern Tanzania, generate energy, and preserve the environment. It consists of constructing a 1,025-metre-long dam, with a height of 131 metres, and a storage capacity of about 34 billion cubic metres.