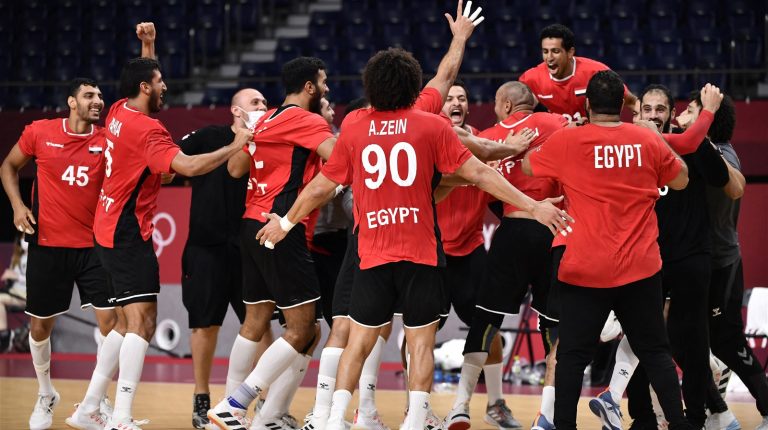 The Egyptian Olympic handball team will play France on Thursday morning in the semi-finals of the Olympic Games Tokyo 2020.

The coaching staff of the Pharaohs aspires to complete the journey and continue the series of strong performances in the tournament, with only one defeat against Denmark in the group stage.

Garcia was keen to watch the French national team matches in the tournament, and the final scenario was drawn up in which the Spaniard would play against the French roosters in order to overcome the obstacle of the semi-finals, reach the final and play for the gold medal.

The Pharaohs’ journey in the tournament witnessed distinguished results, starting with a victory over Portugal with a score of 37: 31, and losing in the second meeting to Denmark with a score of 32: 27, and winning in the third against Japan 33: 29, and in the fourth confrontation against Sweden with a score of 27: 22.

Egypt’s national team won the quarter-final match against Germany 31-26. The Egyptian team participates in the Olympic competitions for the seventh time in its history, and enters the competition as the world’s No 7.

During their match against Germany, the Pharaohs made a strong performance and dominated from the beginning.

The Egyptian handball team met with the German national team in the Olympics 8 times in 7 Olympic tournaments. The Egyptian team was in a difficult group, which included Denmark, Sweden, Portugal, Japan, and Bahrain. The first group includes Norway, France, Germany, Brazil, Spain, and Argentina.

The French national team had reserved its place in the semi-finals of the Tokyo Olympics for handball competitions, after defeating Bahrain in the quarter-finals of the tournament.

The French team defeated Bahrain by a great score 42-28, in the match that took place between them at dawn last Tuesday in the quarter-finals of the tournament.

France succeeded in qualifying for the semi-finals for the sixth time in its history in the Olympics through 8 participations, as it won gold in the 2008 and London 2012 editions, while it won bronze in Barcelona 1992, silver in Rio de Janeiro 2016 and fourth place in Atlanta 1996.

The duo is considered a safety valve for the Pharaohs. They played a major role in the national team’s arrival to the semi-finals of the Olympic Games currently being held in Tokyo.

Coach Garcia places high hopes on the duo of our national team due to their long experience and high capabilities.

Karim Hendawy was born in May 1988 and played for many clubs, including the Turkish club Besiktas, Al-Ahly, Zamalek and Romania’s Dobroga Sud Constana.

“The Octopus”, as Karim Hindawi is nicknamed, started his sports career at Al-Shams Club and drew great attention to him, which made offers rain down on him, whether in Egypt or outside Egypt.

At the beginning of the youth stage, the “octopus” moved to Al Ahly SC and won the title of best goalkeeper in the World Youth Cup in 2009. His contract with the Red was supposed to expire after the tournament, but after waiting, none of Al-Ahly officials spoke about renewing the contract, which led to him receiving an offer from Zamalek, to which he agreed.

The “octopus” contributed to the crowning of Zamalek club in achieving the historic quartet, which includes the African Cup of Cups, the local league, the Egypt Cup, and the African Champions League.

After shining with Zamalek, he received an offer from the Turkish club Besiktas and moved to it and succeeded in winning the league, the Turkish Cup, and the Turkish Super.

Hindawi moved to the Macedonian club Europarm Pelister, to return this summer to Zamalek to strengthen the goalkeeping position in the white handball team.

He participated with the national team in several international tournaments, such as the World Cup competitions and winning the title of the last African Nations Championship, which was held in Tunisia.

In the match against Germany in the quarter-finals, Katunga succeeded in 18 saves from 44 shots, with a success rate of 44%, which is a fantastic percentage for a goalkeeper against a big team and in a knockout role in any major tournament, not only in the Olympics.

Mohamed Essam Al-Tayyar is also one of the best goalkeepers in the history of Egypt. He has high experience and appeared in an honorable manner during the current Olympic Games in Tokyo.

Al-Tayyar showed a strong level in the Olympics after he succeeded in gaining the confidence of the masses in the last world championships hosted by Egypt last January.

Al-Tayyar contributed to leading the Pharaohs to overcome the obstacle of the preliminary round.

Mohamed Essam Al-Tayyar was born on 7 April 1996. He has ambition and determination, and has previously led the Pharaohs to reach the seventh place in the last World Cup in Cairo.

Al-Tayyar started his sports career with swimming before switching to handball, but he did not find himself in any position other than goalkeeper.

Ahmed El-Ahmar, the handball legend, continues to break records and individual and collective achievements, and succeeded in leading his colleagues to achieve a historic victory yesterday, over Germany, 31-26, in the quarter-finals of the Olympic Games.

El-Ahmar achieved record numbers with Zamalek as well, as he won many championships with the White Castle, and decided with his experience many matches, during which he won the title of top scorer and best player many times.

El-Ahmar was born on 27 January 1984 to a family supporting Zamalek SC. He is the son of the captain of Zamalek in handball, Mustafa Al-Ahmar, and his sister Naira Al-Ahmar.

El-Ahmar won with the Egyptian national team 10 championships, including 4 African titles in 2004, 2008, 2016, and 2020. He was crowned with the Pharaohs with the gold of the African Games 3 times, two titles of the Arab Games, and the title of the Mediterranean Games.

At the level of clubs in the continents of Asia and Africa, Ahmed Al-Ahmar was crowned with 19 continental championships, to be number one in the world in obtaining continental championships, as he was crowned with Zamalek 5 times in the African Champions League and 5 African Super Cups, once in the League of Champions Cup and 4 times in the African Cup Winners’ Cup, in addition to winning third place in the Club World Cup 2010.

Tunisia closes borders with Libya due to COVID-19

After historic record in Tokyo 2020, Egypt prepares for next Olympic Games in 2024: Sports Minister